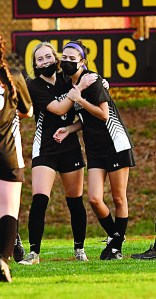 Staff report
SALISBURY —  Salisbury’s girls soccer team celebrated the careers of six seniors on Monday with an 8-0 win over Ledford at Ludwig Stadium.
The senior class of Clara Brown, Caroline Cardelle, Lillie Rusher, Theresa Holland, Piper Muire and Caroline Clark improved to an astounding 56-4 overall and 42-1 in the Central Carolina Conference.
Four seniors scored: Muire, Cardelle, Holland and Rusher.
Junior Sutton Webb scored three goals for the Hornets, and freshman Izzy Banish completed the scoring.
Assists were credited to Rusher (3), Cardelle (2), Holland and Webb.
Clark recorded the shutout in goal.
“It was a bittersweet night, to say the least,” Salisbury coach Matt Parrish said.  “I have been incredibly fortunate to be trusted with (literally) years of lineage. Cardelles for 16 years. Rushers for eight years. The Brown/Ford family for eight years. Hollands for seven years.  The success of those years starts at home, grows with their youth coaches, and finally extends all the way up to me at the end of this line. That is an honor and a privilege that I don’t take lightly. Far beyond their performance on any field, I am incredibly proud of the human beings they have each become.”
Salisbury improved to 8-0 on the season and 5-0 in the CCC.
Salisbury has vital conference games left: Wednesday night vs. East Davidson, April 26 vs. North Davidson (also undefeated in conference play), and April 28 at South Rowan.
The playoffs start in two weeks.
You Might Like