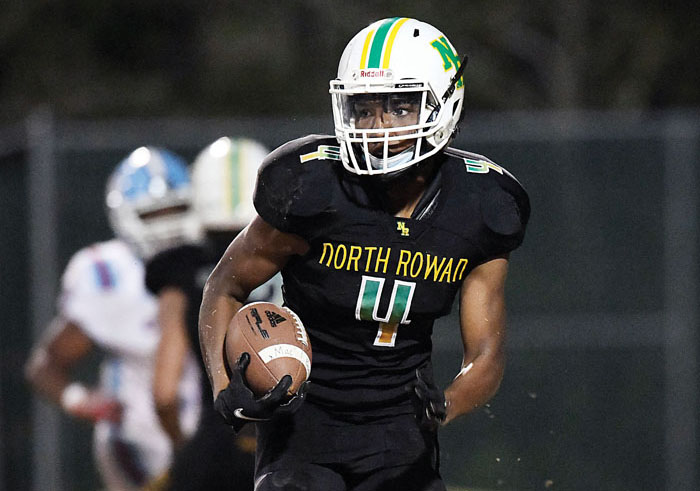 North’s Amari Mcarthur runs the ball during a game against North Stanly on March 26. photo by Wayne Hinshaw, for the Salisbury Post

SPENCER — North Rowan receiver Amari McArthur has all the tools.

He’s tall. He has soft hands. He can fly. He also exudes that elusive want-to that not everyone who possesses all the tools has.

McArthur really wants to be special, so he’s going to be hard to cover and hard to tackle for two seasons after this one.

Almost 6-foot-3, with more growth likely coming, the sophomore has made his greatest impact on the field the last two weeks.

Yes, there were some growing pains. He had one TD catch in North’s first five games.

But he has four touchdowns in the Cavaliers’ last two. He had two TD receptions and he nearly got into the end zone a third time in Friday’s 66-26 wipeout of Community School of Davidson in the first round of the 1AA state playoffs.

“Everyone says they didn’t see that coming — and I didn’t 66-26 coming, either,” pleased head coach Nygel Pearson said with a chuckle. “We didn’t play perfect, but we played our best game. We were really good in the first half.”

“Community School had been able to run the ball on people, with lots of iso stuff,” Pearson said. “When we shut that down, we pushed them out of their comfort zone. They had to throw it around. Then we got some picks.”

McArthur did see it coming. Maybe not 66-26, but he did see the Cavaliers winning big at home in Round 1.

“Our intensity was much higher with it being a playoff game,” McArthur said. “In the locker room, you could tell. The hype was a different level.”

Before the basketball season, McArthur did astounding things, at times, for North basketball coach Jason Causby. He was All-Yadkin Valley Conference as a first-year varsity player.

Still, he’s not one of those guys who looks at football as something to do to stay in shape between basketball seasons. He’s serious about football. He sees football as his present and his future. Basketball helps cross-train him as far as quickness and agility, but when he dreams, he dreams about one-handed catches, not one-handed dunks.

“Making all-conference in basketball as a sophomore was a blessing, but football is my game,” McArthur said. “What do I like about it? Well, out here on the field, you can hit people, and there’s no foul.”

North Rowan (5-2) had two harsh reality checks in this football season — a 43-0 flattening by 2A Hibriten and a 15-0 lockdown by North Stanly in a game for the YVC championship. The Cavaliers had 48 passing yards against Hibriten and 3 passing yards vs. North Stanly, but lessons were learned. If teams were going to load the box and take away the run, they had to get better in the passing game.

“We made a commitment to throwing the football and throwing the football more efficiently,” Pearson said. “(Quarterback) Kyree Sims has responded with two straight big games. He’s learning to take the cheese — to take what the defense is giving him. He’s understanding that he doesn’t have to throw deep on every play.”

Sims has put up two straight games with 100-plus passing yards — and 100-plus rushing yards, and that’s the measuring stick for the dual-threat QB.  He’s thrown for 323 yards in the last two games. McArthur has accounted for 217 receiving yards the past two weeks, about 67% of the Cavs’ total. He’s averaged 31 yards per catch in that span.

“Amari has started to realize who he is as well as who he can be,” Pearson said. “He can beat people downfield. He can make them miss after a catch. But he can also dominate them with his blocking. Blocking is the area where he’s improved the most. Part of the process is learning to be a good player even when the ball is not in your hands, and he’s learning that. He’s giving us better blocks downfield.”

McArthur agreed with that.

“I didn’t really like to block early in the season because I didn’t think I was getting the ball enough,” McArthur said. “But if you’re going to be a good wideout, then blocking comes with it.”

McArthur and Sims are brothers, and that goes beyond the normal football team brotherhood. They share blood. They are half-brothers. They have the same mom.

That may help to explain their blossoming chemistry as a pass-catch duo.

The last two weeks, McArthur has glided past overmatched defenders on post and corner routes, and Sims has laid the ball out there for him.

One of their touchdown connections came in the last five seconds of the first half against Community School of Davidson to basically put the game away at 42-10.

“I lined up and had single coverage with no safety help and just took off,” McArthur said. “My brother basically threw a jump ball for me and I went up over two defenders and got it in the end zone.”

Pearson said an important part of North’s game-planning is finding ways to ensure single coverage for McArthur. He’s usually a slot receiver, but North will also shift him outside to get the most favorable matchup.

“Amari has started to see that he can be that guy for us,” Pearson said. “Our job as coaches is to make him want to be that guy all the time.”

While McArthur will be important to the Cavs’ at home this Friday when they try to avenge 2017 and 2018 playoff losses to Polk County, he’s already started to think beyond this season to a summer of workouts and weights before the fall season starts in 2021.

He still has a basketball player’s lean body, at this point. There are lots of potential pounds to be added in his chest, shoulders and arms.

He plans to add them. If he does, there may be no containing him.

“This offseason is going to be huge for him,” Pearson said. “He doesn’t have that good weight-room weight yet.”

Catawba baseball: Crowd comes out to say goodbye to…