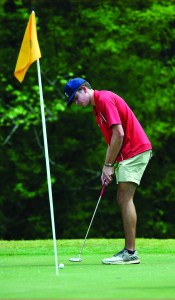 Colby Patterson shot 69  at Warrior on Monday as East Rowan cruised to the North Piedmont Conference championship in boys golf.

“We’ve got a  great bunch of boys and they have had a good work ethic since  the first day,” East coach Rhett Teems said. “Great job by the Warrior staff today, and West Rowan really played great.”

Landon Merrell shot 72 for the Mustangs, while Jaden Sprinkle shot 75, and Whitt Hoesman shot 88 to round out the four scorers.