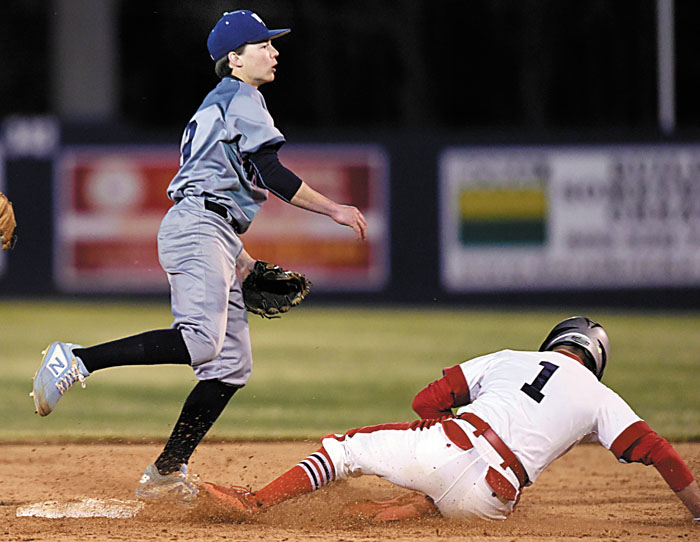 East Rowan’s Charlie Klingler forced out at second as West Rowan second baseman Steven Smith throws to first during a game in 2019. Photo by Wayne Hinshaw, for the Salisbury Post.

Second in a series of reports on local baseball teams …

But West Rowan is very comfortable being the North Piedmont Conference darkhorse in this shortened season.

Head coach Seth Graham doesn’t have any bad teams and is approaching 100 career wins. The 2021 Falcons won’t be an easy game for anyone.

The Falcons recently won a spring league tournament, beating Mooresville, Carson and Northwest Cabarrus, so they take confidence and momentum into a whirlwind of a season that cranks up next week.

West figures to have a typical Graham team, which means it will rely mostly on pitching and defense.

“Our strength will be our starting pitching,” Graham said. “Casey Gouge and Steven Smith. We like those guys matched up against anybody.”

A junior left-hander who is regarded as one of the top uncommitted prospects in the area, Gouge throws fastballs 85 mph, but what makes him special is a combination of control, poise and off-speed pitches. Because COVID wiped out all but five games of the 2020 season, he has a limited track record in high school varsity play, but he’s 3-0 in limited opportunities and he’s been impressive in showcase ball as well as summer ball at Newman Park.

Smith is an athlete who is known as West’s veteran shortstop, but he’s shown in a variety of summer and fall events against strong competition that he can pitch at a high level. In a memorable outing, he beat the powerful South Charlotte Panthers with his bat and with his arm. Smith is only 5-foot-9 and only 150 or so pounds, but he throws like he’s 6-foot-3. He has a lively mid-80s arm. He’s headed to Caldwell Community College.

A complication for the Falcons is Smith’s dislocated thumb. Graham says he’s going to miss the first two weeks.

West’s third pitcher is projected to be lefty Andrew Kennerly, so Kennerly probably moves up to No. 2 on the staff until Smith returns. Other potential hurlers are Jake Blevins, Zander Burton and Matthew Connolly.

Connolly is a key newcomer. The sophomore is expected to be the primary catcher. He’s impressed Graham so much that long-time catcher JT Fecteau has moved to second base.

“Connolly has really developed as a catcher in the last year, and this is move with JT that is going to make our middle infield defense stronger,” Graham said.

Another newcomer to keep an eye on is sophomore Zach McNeely.

“He’s a rising star and will make a varsity impact early,” Graham said. “He’ll play shortstop until we get Smith back, and don’t be surprised if he stays in the lineup somewhere after Smith returns.”

The corner infielders are expected to be first baseman Zander Burton and third baseman Peyton Summerall.

West doesn’t have big numbers, but it has versatile players such as junior Noah Loeblein, the football team’s quarterback. Loeblein can catch or play outfield. He’ll probably be the starter in left field.

“We’ve got good flexibility,” Graham said. “When we change pitchers, we can move guys around without sacrificing any defense. We’re going to be athletic in the outfield with combinations of Kennerly, Watts, Loeblein, Gouge and Blake Oliphant.”

West isn’t likely to hit many balls over the fence, but the Falcons will have some wheels. Kennerly, who made a splash as a big-play football receiver as a senior, will be the center fielder when he’s not pitching. He should be an ideal lead-off man. Hunter Watts, a football DB and returner who runs very well, is expected to be the starting right fielder and will probably bat in the No. 9 spot.

Graham envisions a lineup that will have Kennerly, McNeely and Smith (once he’s healthy) at the top, with Fecteau, Gouge, Connolly and Burton swinging in the middle.

“We’ve got some speedy table-setters and we’ll have guys who can handle the bat in the middle,” Graham said. “We’ve got an offense that should be able to pressure opponents. We like our team. We’re looking forward to a great season.”