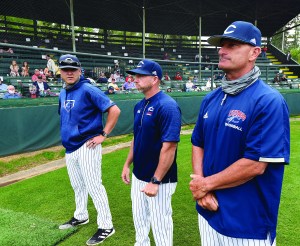 Catawba coaches. Photo by Wayne Hinshaw, for the Salisbury Post.

Jeremy Simpson homered for the Indians.

Maddux Holshouser pitched four innings. Caleb Link got the win, and Robbie Cowie got his eighth save.

The Catawba Indians captured the South Atlantic Conference Regular Season Championship, finishing the regular season with a record of 24-6 in conference.

With the crown, Catawba has earned the No. 1 seed in next week’s South Atlantic Conference Baseball Championship.