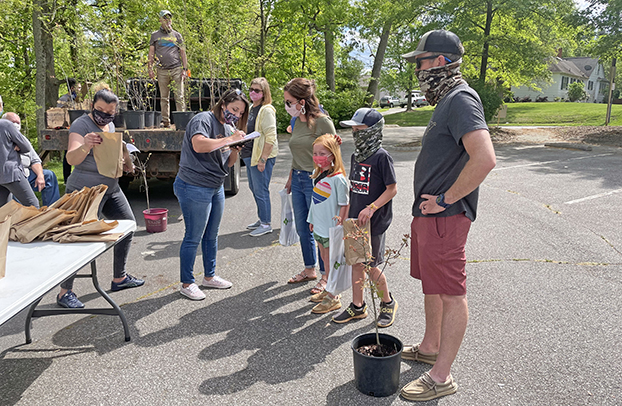 Natalie Anderson/Salisbury Post — Locals on Sunday visited the Salisbury City Park for a biennial "We Dig Salisbury" event where nearly 100 trees were given away. The event was hosted by the city's Community Appearance Commisison and Tree Board. Local organizations such as Bread Riot, Muddy Sneakers, Inc., the Rowan County Extension Master Gardeners Program and Horizons Unlimited were also present to provide information about upcoming events, such as summer camps, in an effort to promote environmental education.

SALISBURY — In an effort to promote environmental education, the city’s Community Appearance Commission and Tree Board partnered Sunday to host a drive-thru tree giveaway during a “We Dig Salisbury” event.

Though the event began at 2 p.m. at the Salisbury City Park, dozens of people and vehicles were already lined up and ready to select their favorite tree before then. Stephen Brown, a local landscaper and the city’s arborist, said about 110 trees were purchased for the event, including more than a couple dozen from Godly’s Garden Center and Nursery Inc. Toward the end of the event at 4 p.m., an estimated 70 trees had been given away. Brown said extra trees would first be given to volunteers, but they certainly wouldn’t go to waste.

Jessica Cloward, who is on the Community Appearance Commission, said the city provided a variety of different trees for the event, including Kousa dogwoods, magnolias, red oaks and cypresses. The dogwood tree, which was blooming on Sunday, was the most popular and first type to be exhausted by the public.

Brown said the ideal time to plant trees is in the fall, but the early spring is fine as well. Locals who received trees also received a bag with planting and growing instructions. Brown said as long as trees are properly rooted and watered at least twice a week within the first year they should be fully rooted and require less maintenance by the fall.

The trees given away Sunday ranged from 2 to 5 years old, Brown added.

The last “We Dig Salisbury” event was held in 2019. During that event, trees were planted across the community.

Alyssa Nelson, the city’s urban design planner and staff liaison for the commission, said the event complements the city’s BlockWork program, where volunteers paint, clean, landscape and make other improvements to neighborhoods across the city. The inspiration comes from Winston-Salem’s Community Roots Day, where residents spend a day planting trees in the city.

Local residents Matt and Leslie Sechler along with their children, Hudson and Ila, said they were excited to receive a red oak tree Sunday. They intend to plant the tree in their front yard, and often enjoy lots of outdoor activity.

Sharon Earnhardt of the Pedal Factory selected a magnolia tree during her “Sunday social ride” with other bicyclists. She added that it was great to see the city’s numerous environmental groups and agencies all in one place to provide education.

Also at the event, locals could enter their name into a raffle contest for various prices, including a 25-gallon, 8-foot, white oak tree to be personally planted by Godly’s Garden Center, a gift basket with various items and a black and white winter portrait of downtown Salisbury from Sean Meyers Photography.

In total, the raffle generated a little more than $175, which will be used to purchase more trees for future events. About $2,000 in funding allowed the “We Dig Salisbury” event to take place.

The city encourages locals who selected a tree Sunday to take pictures and document the tree’s growth process with the hashtag #WeDigSalisbury on social media.

Downtown Gateway Building to be renamed for late Paul…