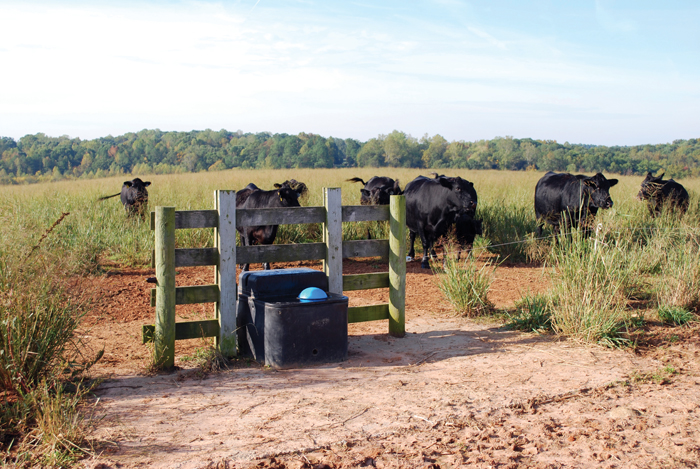 Cows at Correll Farms in Cleveland.

Agriculture is a vital part of Rowan County. For generations, farmers and agriculture workers have supported their families and provided food and fiber to their neighbors and communities near and far. Even though farming and other aspects of agriculture have changed tremendously throughout history, one fact remains. Each of us needs the agriculture industry every day.

From the county’s founding in the 1750s, folks from other territories traveled the Great Wagon Road to Rowan County for its fertile soil. Today, the county has 925 farms covering 118,914 acres. The county ranks in the top 15 in the state for berry, fruit, nut, vegetable and melon production and is sixth in the state for dairy cattle.

Farming is not just a business; it is often a way of life that is passed down through many generations. Rowan County is a testament to this way of life, as the county has 27 farms listed in the N.C. Department of Agriculture’s Century Farms registry. To qualify, a farm must have had continuous ownership by a family for 100 years or more. Several of those Rowan County farms can trace their roots back to the late 1700s and are N.C. Bicentennial Farms, having been in the same family for more than 200 years.

Farming and the agriculture industry helped to shape Rowan County. At least six flour mills operated in the county in the late 1800s, and several continued operation for nearly 100 years. These flour mills supported the needs of those in the county and shipped flour by rail car to other cities and states. Rail transportation was extremely important to these mill locations. If you drive around today, you will see the mills, or remnants of them, situated right next to rail lines.

Farmers began producing wheat and other crops as soon as they arrived in the county, but in the early 1900s, they got some educational help in the form of extension agents. In 1909, Mr. J.S. Hall was hired as the very first Rowan County Extension agent. In 1914, the Smith-Lever Act was signed into federal law to establish the Cooperative Extension Service, an organization that connected with land grant universities to help farmers learn new techniques with the introduction of on-farm instruction. These first agents and those after introduced new techniques to help farmers in many ways. As early as 1920, Agent W.G. Yeager began a soil-building program and helped introduce improved livestock selection. He noted that there was better living because people were taught how to produce and preserve food. He also had more than 200 farms adopt one or more of the improvement practices he introduced relative to soil and crop production.

Today, the Farm to Table movement is important to many local farms and our county. We like to take credit for this movement, but as early as 1923, Rowan County had a curb market with more than 25 families participating, selling and exchanging dairy products and pantry items like grains, plants, poultry and other products. The market took place once a week and was typically sold out in less than two hours. The 1925 Rowan Extension report noted how much this market benefited the local farmers. “Mr. Frank Cress is building a poultry house and making preparation for a larger flock next year out of the proceeds of his market produce. Other families are keeping their children in high school and making improvements to their homes with monies received at the market.”  In the 1920s when 75% of the population lived in rural areas, this money was extremely important and allowed children to stay in school rather than work full time to help support their families. Today, the movement to eat local and buy local foods helps farmers in the same ways. Direct-to-consumer sales allow the farmers to realize a higher percentage of profit when compared to wholesale sales.

With the increase in knowledge about soil health, animal genetic improvements and a general era of growth, 1925 welcomed the opening of Rowan Creamery. Rowan Creamery was a state-of-the-art facility at the corner of Lee and Kerr streets in Salisbury. The dairy farmers in Rowan County had been improving their cows with better genetics and better nutrition which led to better health and more milk. Now they needed a local place to process their product. Rowan Creamery’s goal was to process high-quality butter fat, higher quality than the neighboring creameries, and in order to set themselves apart with a superior product, they were willing to pay farmers more. Of course this was an incentive to continue to make improvements to dairy herds, and that is exactly what happened.

By the mid 1940s, Rowan County was serviced by several milk processing plants. With the start of World War II, many policies and programs changed. The need for products at war camps caused most of the milk from Rowan to be purchased by Coble of Lexington, where it was processed and sent to the camps. Rowan Creamery continued to be a vital part of the community by processing milk and cream for retail sales in Salisbury. In 1947, Rowan Creamery consolidated and sold to a co-op, becoming Rowan Dairy. Other interesting developments occurred in the late 1940s. The sweet potato curing house was converted from wood to electric heat, the first electric-powered hay dryer, a 40×60 barn with double drum blowers was invented to quickly dry hay, and the first mechanical manure loader was created. There were continued improvement in small grain production and the county was listed as top in the state with seed wheat highly sought after as a premium crop. Dairy continued to be the major enterprise with the production of milk as well as breeding of high-quality Guernsey breeding bulls with superior genetics.

Grocery stores as we know them today did not exist. Products from all over the country weren’t readily available. People either had to grow what they consumed or purchase it from local sources when it was in season. In the late 1940s, the Naile Brothers, who operated a modern meat market and grocery on South Fulton Street, opened a freezer locker in the building adjoining their store. Families who raised animals for food as well as farmers who sold food animals could rent freezer space to preserve their meat. The freezer locker had 189 cabinet-type lockers that rented for $12 per year and 126 drawer-type lockers that rented for $15 per year. The facility was quickly full and had a waiting list to rent a locker.

The 1950s and ’60s saw greater soil conservation, crop rotation and more sustainable practices in all aspects of agriculture.  The Rowan Soil and Water Conservation District, along with the N.C. Soil and Water Conservation Commission (Soil and Water), began helping farmers and land owners alike create and implement conservation plans. On our farm for example, there are conservation plans dating back to the 1950s. Some of those first plans were to create grass buffers around crop land to prevent topsoil runoff and erosion. Soil and Water continues to work diligently to “foster voluntary, incentive-driven management of soil, water and related natural resources for the benefit of the environment, economy and all citizens.”

The Federal Farm Bill of 1970 paid farmers throughout the U.S. to replace part of their cash crops with soil conservation grasses. Teaching the importance of conservation grasses along with soil health and other conservation practices began more than 50 years earlier in our county and the benefits of those efforts are still seen today. Chris Sloop, the current Rowan County Soil and Water District director, says each year his office “helps create dozens of nutrient management plans for all kinds of farms to ensure precise and accurate nutrient application to minimize runoff to streams and optimize crop production.” We all benefit from conservation practices.

Through the years, technology and innovation have changed many aspects of farming and agriculture but the commitment of farmers to preserve the land and pass it along to the next generation remains the same. David Correll, a fifth-generation farmer in western Rowan County, says, “As a father of two, sustainability is a goal I must always keep in focus. It is my intention to manage our land and resources as well as the viability of our operation so that they can become the sixth generation to work this farm.” In his TED talk “A Personal Story about Farming and the Future of Agriculture,” Mark Jackson, who farms with his son on a multigeneration farm, says, “modern tools are allies in efforts to produce a bountiful harvest all while protecting land and environment for future generations.” Teaching conservation practices and good stewardship to the next generation is an essential part in passing along the farming operation.

Many things that history describes as normal of the day, we do not understand. The need to grow our own food, renting a locker to hold meat for our family and trading with other locals for grains and household items are just a few of the things that are foreign concepts to us. For 99% of the population, most aspects of farming are abstract. For those of us who work on the farm everyday along side our families, we know the strife and love that the generations before us put in to make our careers in agriculture possible. We also know that like no generation before, we must advocate for farming and agriculture.  With only 1% of the population residing on working farms, we must strive to educate others on the realities of the modern day farm, realities that truly aren’t as different from those before us as many might think. History is a great teacher and farmers are great students.

Cheryl McCoy Correll is vegetable farmer and is also on the board of trustees of Historic Salisbury Foundation.

‘A safe place for them’: Timeless Wigs and Marvelous…