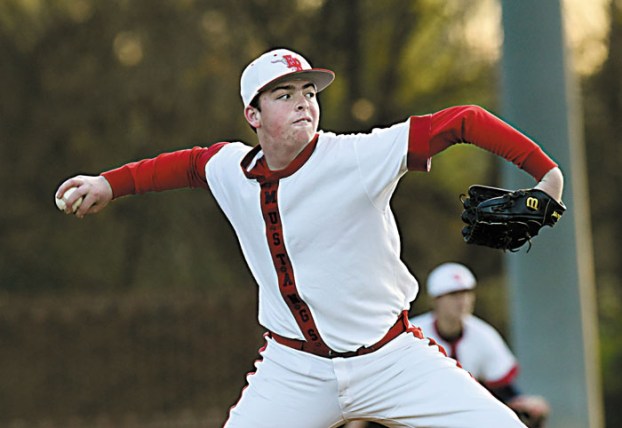 East's pitcher Jake Hunter figures to the be ace for a well stacked deck of Mustang pitchers. File photo by Wayne Hinshaw, for the Salisbury Post

GRANITE QUARRY — East Rowan head coach Brett Hatley says the most action his infielders figure to see when Jake Hunter is pitching is throwing the ball around after strikeouts.

Hatley is only kidding … well, sort of.

Hunter, who has been really hard to hit since he was a freshman, figures to be the ace of a stacked deck of arms. Potentially, East has one of the best high school staffs ever assembled in Rowan County.

College coaches and scouts drool over the Mustangs. They love the Mustangs’ potentially overwhelming crew of right-handers.

That’s why the 6-foot-4 Hunter has signed with East Carolina. That’s why fellow senior JD Basinger is headed to Catawba.

As far as 6-foot-4 junior Cameron Padgett, already committed to UNC, and 6-foot-5 sophomore Chance Mako, already committed to N.C. State, there’s not much of a high school track record due to the 2020 COVID season and the late start to the 2021 season. They haven’t actually done great things yet — Padgett is 2-1 in his varsity career, while Mako is 0-0 — but there’s no reason to think they’re not going to be outstanding. They have the tools and the talent. All the potential in the world is there.

“I really like our staff, it’s a really good staff, one of the best I’ve ever been around,” Hatley said. “We’ve actually got a lot of very good arms beyond those four, but with a 14-game season, some guys who deserve to pitch may not get many chances.”

Hunter does have a track record, and it’s all good. He’s 9-3 as a varsity pitcher.

Of all the East pitchers, Hunter is the one whose frame has filled out. At 235 pounds, he looks like a workhorse. He can throw in the low 90s and can mix in sliders, changeups and curves.

Basinger has off-speed stuff that is so good it demoralizes hitters and normally throws in the mid-80s. He’s 6-2 as a varsity pitcher. At 5-foot-11, he lacks the size of Hunter, Padgett and Mako, but he’s equally effective.

Padgett is an exceptional athlete, the football team’s quarterback and a basketball starter. He’s considered a finesse hurler, but he throws fastballs close to 90 and has a great competitive spirit and a fine arsenal of pitches.

And then there’s Mako, who probably has the highest ceiling of all of them.

“Mako throws the fire out of it,” Hatley said.

Mako throws in the 92 range and has a mean slider. It’s just a matter of him getting experience. He could be a draft pick out of high school.

It’s possible sophomores Tate Green and Morgan Padgett may get to the bump some, but as far as pitching, they’re a bigger part of the future for the Mustangs than the present.

Junior Tristan Miller will be the guy counted on to catch all those powerful arms. Morgan Padgett is the backup catcher.

Obviously, if East can score three runs, it will have a great chance to win any seven-inning ballgame.

The offense should be pretty good, even though Charlie Klingler, who smacked a lot of singles and doubles, and Wayne Mize, who launched lots of  homers, aren’t around now. COVID cost them their senior seasons.

Hatley, a former West Rowan and Catawba standout, says quite a few positions are still up in the air as the season approaches.

East may not have a set lineup. The names on the lineup card will depend on that day’s pitching opponent, as well as who’s on the mound for East.

All four of the frontline pitchers swing a bat well enough that they could be in the lineup somewhere when they’re not on the mound. Hunter and Mako have home run power when they make contact. Hunter can play first base. Mako can play third base. Basinger is an outfielder. Padgett can play just about anywhere on the diamond.

Jacob Causey is available for first base when Hunter pitches.

As far as the defense up the middle, freshman Charles “Cobb” Hightower, son of former East head coach Brian Hightower, figures to be the shortstop.

Senior Bryson Shive and junior Austin Fulk have been competing for the second base job.

There’s been a lot of competition for playing time in the outfield, although Hatley said Aiden Schenck, a rugged, 6-foot-2, 200-pounder who transferred from A.L. Brown, will be in the outfield somewhere. The Mustangs will need his poweful bat.

“We can play offense or defense, different lineups depending on game situations,” Hatley said. “We’ve got a lot of guys swinging it well right now. Everyone on our roster will be valuable.”

With the pitching staffEast has, expectations are high for the first league title since 2014, but everyone also expects Carson, West Rowan and North Iredell to be strong in the North Piedmont Conference.

“We’re always going to have high expectations as a team,” Hatley said. “In this short season, one bad night could knock you out of the playoffs, but we’re in a good situation. We’re not just blessed with talent. We’ve got good senior leadership. We’ve got guys who are good teammates.”