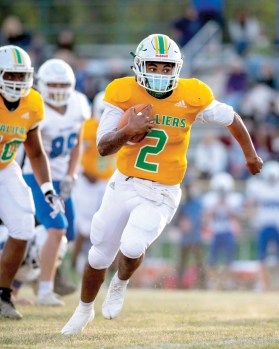 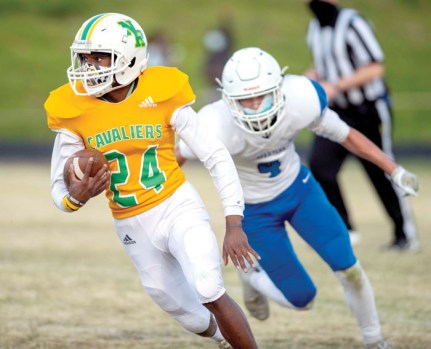 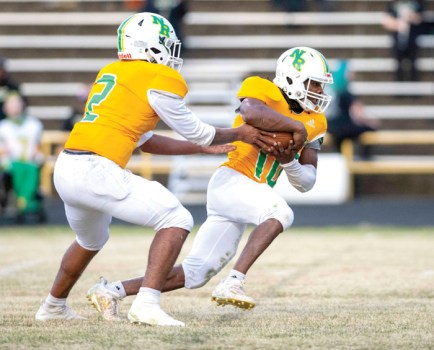 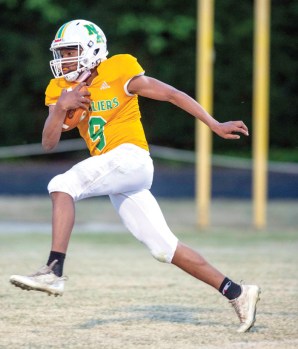 North Rowan’s Jae'mias Morrow is coming off a career game last week and will be looking for more in tonight's matchup against winless Lexington. File photo by JON C LAKEY/FOR THE SALISBURY POST. 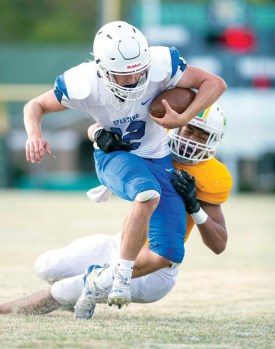 This pandemic-plagued season has thrown the Cavaliers a steady diet of curveballs, but they brought a menacing four-seamer to their 66-26 victory over the Community School of Davidson. The hosts opened the 1AA state playoffs by collecting 546 yards total offense — 371 came in the first half — and intercepting six passes, providing more than enough fireworks to gain a berth in next week’s second-rounder against Polk County.

“Listen, man,” first-year coach Nygel Pearson said, “that’s the best half of football we’ve played all year. It wasn’t mistake-free, but it’s as close as we’ve been all season. These kids were just ready to play. We committed to the vertical pass and decided to go get it.”

North (5-2) earned its first home victory by driving for touchdowns on six of its seven first-half possessions. Quarterback Kyree Sims served up precise passes like hors-d’oeuvres on a tray, completing eight of 13 attempts for 191 yards and three touchdowns. Sophomore receiver Amari McArthur had four receptions for 115 yards and two scores — all in the decisive second quarter. And two-way threat Zay Davis must have had the take sign — he picked off three passes and rushed for 156 yards and a pair of TDs.

CSD (5-2) trailed 6-3 midway through the opening period when the wheels fell off. Jae’mias Morrow’s short touchdown burst was followed by a 21-yard Sims-to-McArthur score and an 11-yard TD scamper by Sims, boosting North’s edge to 28-3 with 5:29 remaining in the half. The Spartans then drove 60 yards in nine plays for their first touchdown — a drive aided by three NR penalties.

“It’s hard to win when you throw six picks,” losing coach T.J. Albert said with a post-game chuckle. “But I go back to 28-10 with two minutes left in the first half — and four plays later it’s 42-10. Then you start pressing and it’s hard to come back from that.”

The outcome was all but cemented when North sophomore Khalil Davis recovered an onsides kick near midfield with 2:57 to play before intermission. On first down, Sims lofted a highlight-reel, 50-yard completion to McArthur down the right sideline. One snap later, Morrow smashed into the end zone for 36-10 advantage.

“I knew they wouldn’t put a linebacker on me,” McArthur said of his dazzling catch. “They put a safety, one-on-one. I wasn’t going to lose that.”

Following a quick three-and-out, the Cavs used two plays to nourish their lead. Zay Davis’ 23-yard stampede on first down set up a 37-yard Sims-to-McArthur TD connection with just 4.7 seconds hanging on the clock. “I knew before the play that it was going to work,” noted Sims, who also rushed for 126 yards on 17 carries. “The corner was playing the outside receiver and Mari was lined up inside. He just ran over the top and I threw him a great ball.”

No one was more impressed with the senior triggerman than Pearson. “(Sims) finally looked like the guy we thought he was going to be,” he said. “That’s the guy we expected to see earlier in the season. Those were some of the best deep balls he’s thrown all year. But he’s the type who likes to take a couple hits, a couple shots to find his rhythm. And he got it going tonight.”

North added three touchdowns in the second half — including a 65-yard gallop by Zay Davis with 9:07 to play. Then the undersized senior set the stage for North’s final touchdown by swiping  a Davis Pharr interception and returning it to the CSD 1-yard line.

“They were missing me,” he explained. “But I was coming off a really bad play. Next play I went all out, and the outcome was good.”

“It means a lot to win at home and put 66 on the board,” added Sims. “We brought the energy right from the locker room and let it loose.”