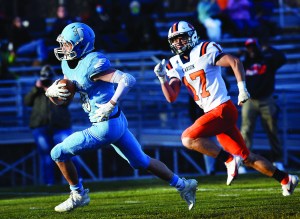 ASHEVILLE — West Rowan accumulated yards, but not points, on Friday and its football season ended with a 14-7 loss to the A.C. Reynolds Rockets.

“It was weird that there wasn’t more scoring,” West Rowan head coach Louis Kraft said. “Both offenses felt really good and both offenses were moving the ball well. But then the defenses would get the key stop or a turnover. They’ve got a great team, a class program, but it was a heck of a game.”

West lost a critical fumble that stopped a scoring drive and had three passes intercepted, but the eight-seeded Falcons (4-4) had their chances to knock off the top-seeded Rockets in the first round of the 3A state playoffs.

West entered the game as a two-TD underdog, but struck quickly right out of the gate when Noah Loeblein connected with Andrew Kennerly for a 63-yard touchdown.

“We had a look we liked and took a shot down the field, and Noah threw a good ball to Kennerly,” Kraft said. “We were off and running.”

The Rockets scored in the second quarter, beating the Falcons on a long pass play, for 7-all. It stayed that way until the middle of the fourth quarter.

West was in scoring territory with eight minutes left, but the Rockets got a strip and a long return. Carter Lindsay’s touchdown run two minutes later provided the decisive score for the Rockets (7-1).

Trying to come back, West was flagged for offensive pass interference on a fourth-and-long.

“I think everyone in the stadium was expecting defensive interference on that one,” Kraft said. “It was an awful lot like the Statesville game. One more break, one more bounce, one more play, and we get it done. I thought our guys played out of their minds all night.”

Noah Loeblein threw for 195 yards, with 161 coming in the first half. The Falcons never got a consistent running game going.

Defensively, the Falcons were stout, holding the Rockets to 109 passing yards and 89 rushing yards.

It was a zany season for the Falcons, who started 0-2, won four straight, and then dropped their last two, including last week’s 17-10 struggle with Statesville in the game that decided the North Piedmont Conference championship.

“I don’t think anyone could have predicted that our season would end in the playoffs,” Kraft said. “Battling that 0-2 start, battling COVID all season long. But from June 15 on, we couldn’t have worked any harder than we did and we improved a lot. I’m already excited about this fall. We’ll have to replace some good guys on that defensive line, but we played a lot of young guys and now they’ve got experience.”

Jacob Perry had an interception for West, while Zeek Biggers, Josh Noble and Jaedeon Neal had key tackles for loss.