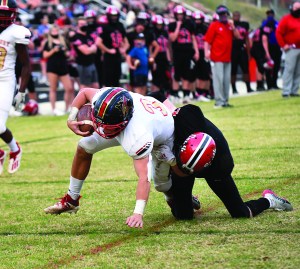 So the simplified version of Salisbury’s defense game plan for the first round of the 2AA state playoffs was this: get to quarterback Ethan Rhodes before he could deliver the ball to James and Culliver.

“That was the challenge we put to our defensive line all week,” Salisbury head coach Brian Hinson said. “Maiden has a couple of great wideouts, and when you face wideouts like that, you have to turn up the heat on the quarterback. Put the pressure on him. Make him hurry. Make him uncomfortable. Our guys couldn’t have responded any better.”

Rout isn’t too strong a verb. Salisbury was bigger and deeper, and it was an everyone-gets-to-play dismantling. Salisbury’s offensive stars, QB Vance Honeycutt and running back JyMikaah Wells, got to enjoy being spectators for the last seven minutes or so.

Rhodes put the ball in the air 33 times and completed 15 for 273 yards, while James and Culliver both produced 100-plus receiving yards. But those five under-pressure picks made all the difference. Salisbury’s offense turned them into enough points to blow the game apart and build an insurmountable lead.

Maiden’s third offensive snap was an interception, and Maiden’s first three offensive possessions ended with picks. Maiden was playing a hopeless game of catch-up after a quarter.

The Hornets’ made a tweak to their defense to get more pressure. Jalon Walker lined up as a defensive end, with DB Zae Neal moving up to Walker’s normal outside linebacker spot.

Walker, the Georgia commit, did more sacking than a Food Lion cashier, and Zae Clay, Brandon Broadway, Nick Hall and Kevin Hayes did what they do every week. They were quick and strong.

Honeycutt and Wells produced humongous rushing games, with both piling up more than 200 rushing yards. That success could be traced to the diligent and dominating work of offensive linemen such as Jacquez Peele, Tkaii Gaither, Chris Green, Bryan Rosado and Sam Evans.

“The 0-line had their best week of practice leading up to this game, and it showed,” Hinson said. “Maiden does a lot of things defensively. They’re stunting, and they’re bringing people at you from different angles. They’re coming at you from all over the place. But our offensive line handled it and our receivers did a great job of blocking on the outside runs.”

Salisbury (6-2) pulled out all the stops for this one, with Walker seeing some action on offense and Honeycutt playing some in the defensive secondary.

An early interception by Honeycutt handed Salisbury the ball at the Maiden 47. Wells blasted for 18 yards. Honeycutt hit Marcus Cook for 22 yards to the 5, and then Honeycutt scored the first of his three rushing TDs.

Maiden tried to throw on first down on its second possession, and Broadway’s sack led to third-and-long. That’s when Walker picked off a deflected pass. Salisbury started that drive at the Maiden 45. Wells, 225 pounds of fury, banged it down inside the 5, and Honeycutt stuck it in the end zone for a 14-0 lead midway through the first quarter.

“The defense was giving us short fields with the picks,” Hinson said. “And the offense was getting touchdowns.”

Maiden couldn’t wake up from an ongoing nightmare on its third possession. Jalon Walker posted a sack for minus-9 one snap before his younger brother, Deuce Walker, intercepted a pass.

James intercepted a Honeycutt pass to temporarily halt the Hornets, but Jalon Walker had another sack to stop Maiden. Then Honeycutt turned a routine-looking play into an electrifying 73-yard sprint for his third touchdown. The Hornets took a 21-0 lead to the second quarter against the shell-shocked Blue Devils (6-1).

A couple of 15-yard penalties against the Hornets helped Maiden get on the board early in the second quarter on a short flip from Rhodes to James.

That was Maiden’s once chance to turn the tidal wave of momentum that was surging against the home team, but the Hornets calmly went back to work. Mike Geter had a 12-yard run with Wells temporarily out with cramps, and Honeycutt took off on a 29-yard dash. On a fourth-and-12 play with 7:02 left in the second quarter, Honeycutt connected with Cook for a backbreaking touchdown and a 28-6 lead.

An interception by linebacker Amare Johnson, the fourth for the Hornets, led to a 26-yard field goal by Wade Robins to close the half. Robins already had booted four PATs.

Maiden connected for a 70-yard TD in the third quarter — Rhodes to Culliver — but it was sandwiched by two scoring runs by Wells. The sophomore rocketed up the middle for a 57-yard score. He also turned in a 4-yard scoring burst that was set up by Honeycutt’s 34-yard scamper. The Hornets led 45-12 at that point, and there were still 20 minutes left to play.

Salisbury’s final TD was scored by Jalon Walker on a 4-yard run with 2:48 left in the third quarter. DB Brian Brown made the Hornets’ fifth interception early in the fourth quarter.

Salisbury racked up nearly 500 yards of offense, with Honeycutt and Wells credited with 214 rushing yards each. Honeycutt only threw five passes, but two were key completions to Cook, one for a score and one that set up a touchdown.

Maiden had negative rushing yards. Every Maiden run hit a brick wall, which left the Blue Devils no option other than to try to throw on the move and under serious duress.

“We played well, really well, in all phases,” Hinson said. “I was pleased with how our guys practiced this week, and their preparation paid off. They executed the game plan.”

Back in February, Maiden, one of the state’s great football towns and schools, lost legendary former head coach Tom Brown, who died at 77. Brown coached Maiden to 330 wins in 35 seasons.

The Hornets were at their best at Thomas E. Brown Stadium on Friday.

“We’ll enjoy this one for 15, maybe 18 hours, and then we’ll get to work getting ready for the next one,” Hinson said.

Burns is another football hotbed. It’s located in Lawndale, about 10 miles north of Shelby.