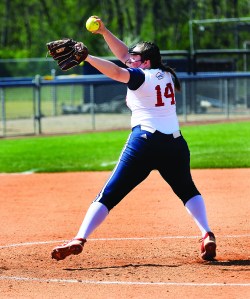 SALISBURY —  Catawba swept a South Atlantic Conference softball doubleheader against visiting Coker on Friday afternoon at Whitley Field. The nine-player Catawba Indian squad picked up wins of 6-3 and 2-1 in eight innings. The wins move Catawba to 28-10 overall and 15-9 in the SAC. Coker falls to 15-17 and 9-13.

Jordan Dean keyed Catawba in the opener, going 3-for-4 with four RBIs. She doubled home two runs in the first for a 2-1 lead, added a RBI in the second to put Catawba up 4-3 and padded the lead with a RBI single in the sixth that got two runs in.

Coker had early leads following a home run by Chloe Pelham in the first and a two-run double from Jessica McWhorter in the second. Both of those hits came with two outs. Madison Hunter kept the Cobras off the board after that double, holding the guests to two hits over the final five innings.

Game two was a pitchers’ duel between Catawba’s Brooke Walser and Coker’s Jordyn Goodman. Both pitchers hurled five shutout innings before the Lady Indians broke through in the bottom of the sixth. Dean singled and went to second on a wild pitch. She came home on a double by Gibson.

Coker scratched for a run in the top of the seventh. A single and two walks loaded the bases and with two outs Makayla Cuthbertson singled on a chopper between short and third to tie the game. Dean was able to throw out a runner at home on the play to end the frame.

With two outs and nobody on in the bottom of the eighth, Catawba put together three at bats to win the game. Gibson flared a single to center and Allie Baker singled in the hole at short. Bailey Benton, who had hit into three double plays in her previous at bats got the winner as she laced a line drive down the right field line to plate Gibson.

Walser (13-4) gave up just one run off six hits, walking five and fanning eight. She also had a double at the plate. Dean added two more hits in game two. Gibson and Baker both had three hits.

Catawba is scheduled to host Belmont Abbey in non-conference action on Tuesday with a 1 p.m. doubleheader.