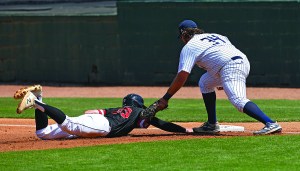 SALISBURY — Catawba baseball swept a doubleheader Friday night over the Anderson Trojans to move another step closer to clinching the SAC regular season championship. Game one ended in 5 innings as the Indians won 12-1, while game two ended in a 5-0 score. Catawba now sits at 27-7 (22-6 SAC) while Anderson falls to 12-22 (10-18 SAC).

Game one was dominated by Tyrese Hearst and a 7 run first inning by the Catawba offense. Hearst went all 5 innings giving up just 2 hits and 1 run, which came on a solo home run by Nick Vella. With the win, Hearst improves to 2-0 on the season and drops his ERA to 2.77.

The offense was on fire in this one, coming up with 11 hits to go with their 12 runs. The lineup was led by Hunter Shepherd, who had 3 hits including a two-run homer in the first inning. Eight of the team’s 11 hits came in the first frame. Later in the inning, Joe Butts hit a three-run shot followed by a Luke Spiva RBI single and a Shepherd RBI double.

In the third, Cameron Mills drove in a run with a single and Dylan Wilkerson later hit a sac fly. The final 3 runs came in the fourth inning when Cameron Morrison hit a home run and Shepherd drove in 2 more runs on a single. On the game Shepherd had 5 RBI.

The loss went to the Trojans’ Christian Carpenter. Carpenter went 1 inning and gave up 7 runs.

The second game was a pitcher’s duel as Greg Brown and Anderson’s Lucas Smith both went the complete game. Brown would finish the night with 14 strikeouts while allowing just 3 hits. Smith gave up 5 runs, but 4 of the runs came in the seventh and eighth innings.

The Indians scored the first run in the first inning when Dylan Wilkinson hit a sac fly to drive home Luke Spiva. The game would remain 1-0 until the seventh inning, when Catawba’s Cameron Morrison and Bryce Butler each drove in a run to make the score 3-0.

In the eighth, Wilkinson came up again and hit a no-doubter to right field for a two-run blast to put the Indians ahead 5-0. Brown would finish off Anderson in the top of the ninth to seal the win for Catawba.

Saturday is Senior Day at Newman Park. Game one of the doubleheader begins at 2 pm.