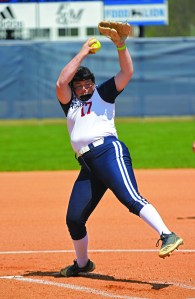 The Indians had 13 players shut down due to COVID contact tracing. Among others, the Indians played without starting third baseman Riley Tucker, second baseman Sommer Gray and first baseman Brittany Ireland.

Catchers Bailey Benton and Gracie Gibson   played a game each at third base.

Walser had a hit and scored a run, and the Indians got four RBIs from shortstop Jordan Dean. Hunter didn’t get a hit, but she walked twice in three trips to the plate.

In the extra-inning win, Walser had a hit. Hunter made two catches in right field and had an assist on a crucial out in the eighth.

Walser (13-4) pitched a complete game with eight strikeouts. Gibson and Allie Baker had three hits each. Benton doubled home Gibson with the deciding run in the eighth.

The sweep moved Catawba into third place in the South Atlantic Conference.

The regional field has been reduced from eight to six  this year due to  COVID,  but Catawba has a chance to make the field even if it doesn’t win the SAC tournament.

Brooke Kennerly had three hits, including a homer and drove in five runs for the Falcons (8-1, 6-1).

Walton struck out 10 and held North Iredell to two hits.

South scored six runs in the seventh to pull it out.

Avery Crowell was the winning pitcher. She struck out four and allowed one earned run.

Kassidy Sechler had three hits. Clara Bean and Bailey Yon had two each. Yon had the tiebreaking hit in the seventh.

Zoie Miller had three RBIs, while McKinley Faw and Breanna Ramseur had two each.

Carson and East Rowan have rescheduled a doubleheader for April 26.

Makayla Borst and Hannah Isley scored four goals each in the NPC matchup.

South Rowan got its first win by topping .A.L. Brown 3-0 in non-conference action.

Cheyanne Hunter made nine saves for the Raiders.

East freshman Hannah Waddell was medalist with an 84 and will be North Piedmont Conference Player of the Year.

East’s Carlee Patterson shot 88, and Emma Callahan was the Mustangs’ third scorer with a 96.

South Iredell’s team will advance to the regional.

East coach Rhett Teems expects Waddell and Patterson to be individual qualifiers for the regional.

East Rowan lost to South Iredell 6-3 in a match that clinched the North Piedmont Conference championship for the Vikings.

The Mustangs (6-2, 5-2) got singles wins from Ryan Brady and Drew Roane, and Landon Shuping/Brady stayed undefeated at No. 1 doubles.