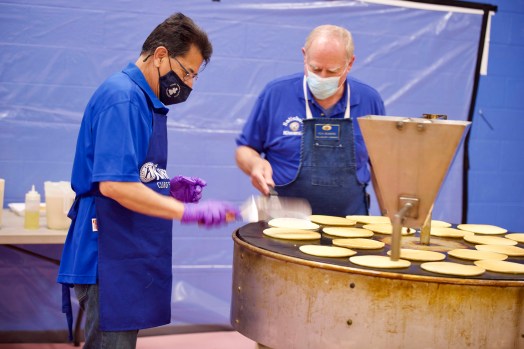 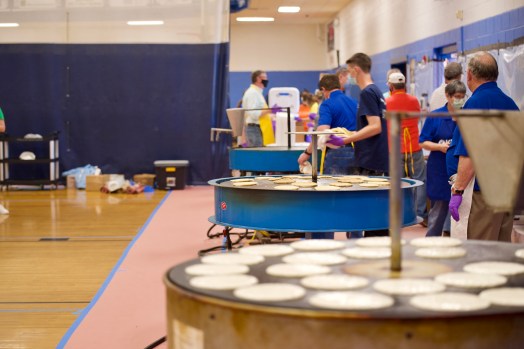 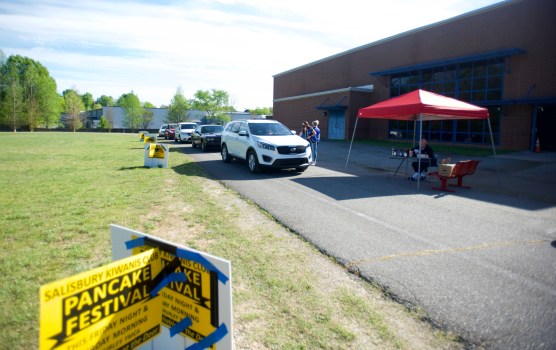 Carl Blankenship/Salisbury Post - people were lined up behind the Hurley YMCA early on Friday afternoon.

SALISBURY — Folks were lining up early at the J.F. Hurley YMCA on Friday afternoon to get their hands on some pancakes for a good cause.

The Kiwanis Club of Salisbury brought back its annual pancake festival as a drive-thru this year. The event is normally a sit-down affair, and last year it was held shortly before the pandemic led to a statewide shutdown of public events. The fundraiser continued Saturday from 8-11 a.m. at the J.F. Hurley YMCA.

Pancake Committee Chair Dick Franklin said Kiwanis pushed the event back about a month this year to aim for better weather and to give people more time to get vaccinated.

The festival is the organization’s major fundraiser. Between sponsorship and sales, it raises about $25,000 per year. That money benefits Kiwanis’ charitable programs with a focus on children. This year’s fundraiser was held in honor of Kiwanian Scott Robinson, a local appraiser and Kiwanian who died suddenly in January.

Every plate had five pancakes and three sausage patties. All told, the Kiwanis Club expected to serve about 7,500 flapjacks between 1,500 customers.

The pancakes were produced en masse, with rotary grills for rapid flipping and an industrial mixer to keep the batter coming. Franklin said the club normally uses four grills, but on Friday it got by with three in less space. Kiwanis and Key Club volunteers were manning all the stations — from intake to pancake — to get the plates out to cars.

Hurley YMCA Executive Director Richard Reinholz, a Kiwanian himself, said the event has been hosted at the facility since 2004, a year after the facility opened.

“The Y’s relationship with Kiwanis is great,” Reinholz said. “We are here for the community and Kiwanis supports the community so it just makes sense for us to be connected.”

Kiwanis Membership Chair Tom McElveen said the event has become a family tradition for a lot of people who come every year.

Sarah and Keith Knight brought their son Graham out to get some pancakes. They come every year.

“We really look forward to it,” Keith said. “Our son loves pancakes. We love supporting Kiwanis and everything they do and stand for. Especially this year with the passing of Scott Robinson.”

Sarah said they are happy the club could hold the event, and they are looking forward to getting back to the sit-down format.

“It gathers a lot of folks in the same place from Salisbury,” Knight said.