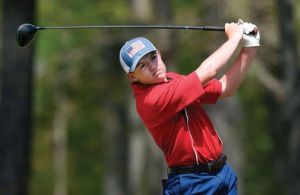 SALISBURY — East Rowan golf coach Rhett Teems has an eye for talent and realized the youngster who lived two doors down might turn out to be something special.

“He had supportive parents who didn’t make him play, but always encouraged him to play, and the kid just ate up golf,” Teems said. “He had the passion for it.”

Merrell shot 1-under 71 at the Revival Golf Club at the Crescent and led East to its fifth championship in the last six county tournaments. The Rowan County Championship was a COVID casualty last spring. Salisbury won the team title in 2019 to interrupt a long East streak, but the Mustangs may have begun a new run on Wednesday.

“We knew it would be competitive today between us and Salisbury,” Teems said. “We saw the (strong) scores Salisbury shot Tuesday at the Country Club. But then Landon walks in the clubhouse with a 71, and we’re up about a dozen strokes, and we know we’ve got breathing room.  Landon has been good in every match we’ve played this year, but today he just smoked it. He lit it up.”

Merrell’s 71 provided the separation in the team chase. East’s other three scorers and all of Salisbury’s four scorers finished in a bunch between 81 and 85.

Patterson and Merrell are neck-and-neck most days. Patterson found trouble on the front nine, but got back on track on the back.

Hoesman is often the No. 4 man for the Mustangs, but he came through with a county runner-up performance.

“Every day is a different day in golf, but make pars and you’ll win just about every high school tournament there is,” Teems said. “Landon makes a lot of pars. He keeps it in the fairway, and then he usually gets it close enough to give himself a chance at a birdie putt. For such a young player, he’s really steady.”

Three birdies, two bogeys and 13 pars were on Merrell’s scorecard. It was enough for Merrell — and the Mustangs — to win with relative ease.

Carson had only three golfers and couldn’t post a team score. North Rowan did not compete.

Carson’s Aden Castor  responded superbly to the challenge of playing 18 holes and playing in the pressure cooker of a county tournament. He upped his game considerably from his nine-hole efforts. He shot 83.

The course played tight and tough, especially when the wind kicked up for a while, but the breeze worked to Merrell’s advantage.

“He keeps it low, never gets the ball real high,” Teems said. “He wasn’t as bothered by the wind as some of the others.”

Teems said the course was in the best shape he’d ever seen it. He praised Derron Dulkoski, who bought the course in 2017 and “revived” it.

Kelly Dulkoski, the former Carson basketball star who is Derron’s daughter, is the course general manager.

“Derron is a real friend of youth golf,” Teems said. “This was an outstanding tournament.”

East will finish off a North Piedmont Conference championship season at Warrior next week.

But the county tournament always matters. When you make out a list of goals before the season, taking the county is near the top of the list.

“Our guys have started thinking about regionals, but the county is always so important, and every coach will tell you that,” Teems said. “We played for all the marbles today, our guys really wanted to do this, and they went out there and got it done. This one means a lot. I couldn’t be any prouder.”