KANNAPOLIS — Looking out over a small crowd gathered at the intersection of Cabarrus Drive and West Avenue, Mayor Darrell Hinnant declared Wednesday “another red-letter day for the city of Kannapolis.”

Soaring behind Hinnant in the near distance was the seven-story, multi-use building called VIDA, which recently welcomed its first apartment tenants. Diagonal from Atrium Health Ballpark, VIDA has been at the core of the city’s downtown revitalization efforts.

In front of Hinnant, past the group of attendees, sat a couple of empty parking lots and a grassy field, which won’t be empty for long. It will be transformed into a 128-unit townhome development known as Pennant Square that will be constructed by Tri Pointe Homes. Ground was ceremoniously broken on the project Wednesday morning when Hinnant and several other city officials, donning gray hard hats and masks, joined Tri Pointe Homes Division President Gray Shell in sinking shining shovels into a mound of sand.

Pennant Square signals the newest phase of a massive revitalization effort in downtown Kannapolis that has been ongoing for years.

“Our citizens say they are absolutely amazed at what we’ve been able to accomplish so far,” Hinnant said. “In fact, we get calls from communities around the area asking ‘How did you guys get all of this done?’ It’s an exciting time to be a part of Kannapolis and it’s an exciting time to see this additional investment coming into the community.”

With ground now officially broken, construction will soon begin on the project Hinnant believes will extend the city’s downtown revitalization efforts southwest out of the city’s center and down West Avenue.

“This expands it,” Hinnant said. “Now we have a lot more property to develop that people will say, ‘Oh yeah, that’s part of the town too,’ because we’ve got these 128 new town houses that are being occupied and citizens will be walking past them. Who knows, maybe there will be some commercial (development) here, maybe there will be some shops. We don’t know yet, but it opens up that avenue for that opportunity.” 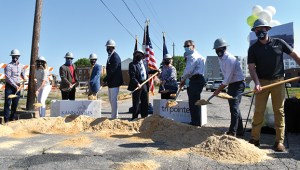 Representatives from the city of Kannapolis and from Tri Pointe Homes broke ground during a ceremony Wednesday morning. Ben Stansell/Salisbury Post

The Pennant Square development has been in the works since 2019 when the city sold the property, the former site of Cannon Mills Plant No. 4, for $896,000 to Sherwood Development and Shiloh Church Development Group. The development groups contracted with Tri Pointe Homes, a California-based company who is still a new player in the North Carolina market.

“Tri Pointe Homes entered the Charlotte market about two years ago and Pennant Square is actually our eighth community in Charlotte, but first in Kannapolis,” Shell said.

Tri Pointe Homes was interested in downtown Kannapolis for many of the same reasons that have brought other recent developments.

“It’s this walkability in downtown and all of the activities coming to the core with the baseball stadium and the apartments and the restaurants and the Gem Theatre, that really drew us to this project,” Shell said.

In the end, Kannapolis city officials decided Tri Pointe’s plans for the area best aligned with the city’s vision. The partnership between the city and developers has remained strong throughout the process. City officials even offered input on how the townhomes were designed.

“Most of the calls that we got were from seniors who wanted to downsize from their houses, who wanted to go from a three or four bedroom place on a half-acre lot where they were cutting grass that wanted to go to a place they don’t have to cut grass but could invest and own something in downtown,” Hinnant said. “Pennant Square is really that idea.” 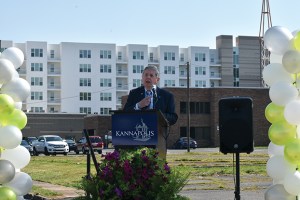 Kannapolis Mayor Darrell Hinnant spoke at a groundbreaking ceremony for a new townhome development while standing a block away from VIDA, a mixed-use project that has helped anchor the city’s downtown revitalization. Ben Stansell/Salisbury Post

Pennant Square will feature 128 townhomes ranging in price from $200,000 to $250,000. Townhomes will be one of two layouts: two-story, three-bedroom units and two-story units with an owner’s suite downstairs and two total bedrooms. Each townhome will have an alley-style garage.

Kannapolis City Manager Mike Legg said during the ceremony having residences available for purchase near downtown has always been part of the city’s strategy.

“Home ownership was something that was a piece of the puzzle from the beginning,” Legg said. “Not only rental properties, but residences in general and actually having people own homes in downtown.”

In addition to constructing over 100 town homes, Tri Pointe will renovate the infrastructure surrounding them.

“The front of the home is going to face the street, so all of the edges of the property are going to have redeveloped sidewalks and a home fronting the public street, so we feel like it will create a great streetscape downtown,” Shell said.

Tri Pointe has already demolished several buildings on the site and has plans to tear down the former Kannapolis Police Department station in the coming weeks. Rough grading on the site will begin within the week, Shell said. The townhomes are likely a year away from being move-in ready, Shell said.

As work begins on Pennant Square, construction is winding down on VIDA, which sits just a block away. The seven story “live, work and play” building features almost 300 apartments, retail spaces and a public parking garage. Hinnant said the parking garage is nearing completion. The hundreds of spaces provided by the garage, Hinnant said, will be needed when the Kannpolis Cannon Ballers start their minor league season in early May.

Work also continues on a $1.1 million renovation to the Gem Theatre. Built in 1942 and rebuilt in 1948, the Gem is one of the oldest single-screen movie theaters with balcony seating in the country. Upgrades to the theater include the installation of handicap accessible restrooms on the first floor, a new HVAC system and restoration of the historic marquee.

J&J vaccine to remain in limbo while officials seek…