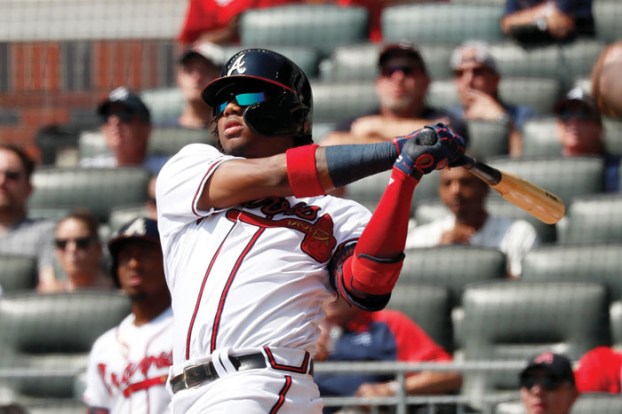 ATLANTA (AP) — Jesus Aguilar drove in the winning run with a 10th-inning double and the Miami Marlins overcame two homers by Ronald Acuña Jr. for their third straight win in Atlanta, beating the Braves 6-5 Wednesday night after squandering a 5-0 lead.

Leading off in extra innings with Starling Marte placed at second, Aguilar dumped a low pitch from Tyler Matzek (0-1) down the left-field line to bring home the tiebreaking run.

Acuña led off the bottom of the 10th with a chance to do more damage after erasing Miami’s big lead almost single-handedly. But Yimi Garcia struck out the Atlanta slugger on three pitches before retiring Freddie Freeman and Marcell Ozuna to earn his second save.

John Curtiss (1-0) picked up the win with a scoreless ninth.

Dropping to 0-3 in extra-inning games this season, the Braves wasted another dynamic performance by Acuña to lose their fourth in a row overall.

He launched a 434-foot shot into the center-field seats in the third inning, doubled off the center-field wall and scored a run in the fifth, and lined an opposite-field shot to the seats in right to tie the game in the seventh.

The Braves have one more game at home before hitting the road. Acuña would surely like to spend a bit more time at Truist Park, where he is 14 of 24 with four homers and eight RBIs over the first six games in Atlanta this season.

Jazz Chisholm Jr. staked the Marlins to their big lead with a three-run homer in the third inning against Charlie Morton.
Miami starter Nick Neidert had a chance to pick up his first big league win while pitching before nearly 20 family members and friends in his hometown.

But the right-hander failed to get through the fifth inning, even after Morton popped into a double play on an attempted bunt with Ender Inciarte running on the pitch.

Acuña followed with another blistering shot, the ball bouncing against the center-field wall for his double.
Freeman followed with a run-scoring single off the right-field wall to make it 5-3, bringing manager Don Mattingly out of the dugout. Adam Cimber retired Marcell Ozuna to end the inning.

The Braves placed LHP Max Fried (right hamstring) and OF Cristian Pache (left groin) on the 10-day injured list. Fried tweaked his hamstring while running the bases in a Tuesday night loss to the Marlins. LHP Tucker Davidson and OF Guillermo Heredia were called up from the alternate training site.

The Marlins go for a four-game sweep in the finale of the four-game series on Thursday. LHP Trevor Rogers (1-1, 1.80 ERA) gets the nod for Miami after outdueling Jacob deGrom in a 3-0 win over the Mets last weekend. Braves RHP Ian Anderson (0-0, 4.35 ERA) will be looking for his first win of the season.

By Mike London mike.london@salisburypost.com SALISBURY —Murphy’s Law states that if anything can go wrong, it will. But in the case... read more