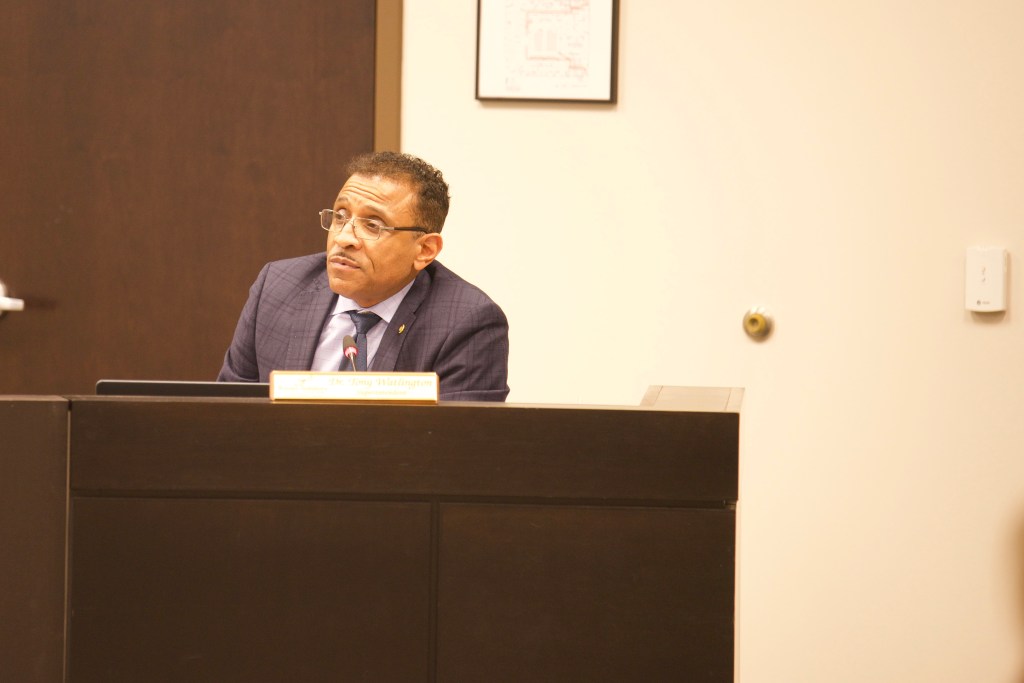 SALISBURY — Rowan-Salisbury Schools board members came away from Monday’s meeting feeling hopeful and aware of how the district needs to improve.

Superintendent Tony Watlington gave the board a look at what he’s been doing during his first 100 days, with a major part of his work involving getting know the district. He started his tenure by touring all the district’s schools. The district also is heading into building a new strategic plan that Watlington said he wants to be the framework for the next few years.

Watlington told the school board he found students to be welcoming and happy to be in school as well as a staff that cares and a district that is making the most out of its buildings even though some of them are pushing 100 years old. His presentation was dominated by diving into what data about the district tells him, starting with demographics.

Student enrollment in RSS has been gradually declining for about a decade. The percentage of students of color is increasing and the percentage of white students is decreasing. The demographics in the community, however, are steady.

The district has seen a notable increase in Hispanic students in the previous decade, climbing from about 10% to more than 20% and passing the percentage of Black students in the districts. If the demographic changes continue, Watlington said, the district will eventually serve a majority of students from minority groups.

He also delved into community-wide health and school statistics, comparing Rowan to Cabarrus, Davidson and Iredell counties as well as the state.

“There’s no science to this. I just thought Iredell, Cabarrus and Davidson were good places to start,” Watlington said, adding they have the longest borders with Rowan County.

Out of those surrounding counties, Rowan has higher food insecurity, opioid overdoses, adult diabetes and a lower life expectancy.

Rowan County also lags behind those counties in median income, but the county starts to see some positive trends compared to its neighbors when diving into trends within its schools. Between 2015 and 2020, RSS saw its graduation rate climb from below 80% to more than 85% and rising, passing the state average and in the running with those other districts, except for Cabarrus.

The district also saw a sharp decline in dropout rate in about the same time period. RSS has the lowest dropout rate out of the four counties and far lower than the state average at less than 1%.

Watlington said the improving graduation and graduation and dropout rates are exactly what a district wants to see. His predecessor, Lynn Moody, was explicit that it is easy to increase graduation rates and testing scores by letting low-performing students drop out.

Watlington also pointed to increasing advanced placement course and middle school math enrollment among all students — both white and nonwhite — as positive trends.

Not all of the district’s numbers during the previous few years have been good. Between 2017 and 2019, the number of schools not meeting growth goals increased from 31% to 50%. At the same time, the percentage of schools exceeding growth expectations declined from 22% to 6%. The number of low-performing schools dropped significantly between 2015 and 2016, but the most recent data from 2019 showed the number is starting to climb again.

Watlington also pointed out the district falls behind nearby counties in both end-of-grade and end-of-course tests as well as third-grade reading levels.

Watlington criticized state-level school report card grades because they emphasize test scores more than growth and expressed his belief the reports should be at least split evenly between weight of annual test scores and growth at a schools.

Watlington also walked through the process of creating the district’s new strategic plan in conjunction with renewal to create outcomes. The process is broken down into pre-work, design and implementing the plan. The goal is to have the plan approved by the board this summer along with the accountability model the district has been working on for about two years so the district can implement the plans this fall.

Watlington said a strategic plan is an opportunity for the board to hold him accountable for the goals they expect to be met.

“That’s why we want to make sure we get the right goals and we do this right, because I fully expect you to hold me accountable for the district meeting those goals on time and on budget,” Watlington said.

• The board reviewed the latest in an ongoing series of contracts being drafted for a $26.3 million federal grant it was awarded last year. The contracts, totaling about $1.87 million, will be fully funded through the grant and come up for approval at the next meeting.

• The board heard an equity and inclusion update from department director Cassandra Martin. Martin updated the board on her work meeting with colleagues and local stakeholders as well as her findings and plan for action during the coming year.

• The board reviewed alternate calendars for Salisbury and East Rowan High Schools, which will come up for approval at its next meeting.

• The board approved a local budget totaling $38.7 million, which represents the county share of its about $190 million total annual budget. The Post will explore the budget for a story in Thursday’s print edition.