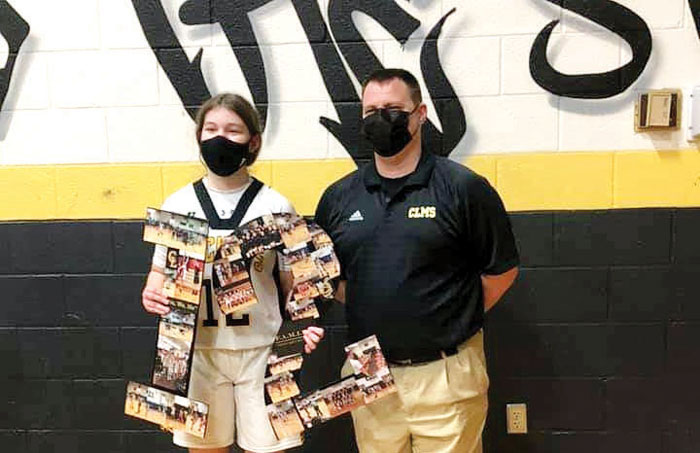 LANDIS — Tyler Rea spent some time in a wheelchair, so he’s thankful for every waking day — and every walking day.

The South Rowan (class of 2011) and Catawba College (class of 2016) graduate spreads a cloud of positive energy wherever he goes. So it’s not a shock that he’s been a major part of a surging Corriher-Lipe Middle School athletics program.

“Tyler is very passionate and committed,” Corriher-Lipe principal April Williamson said. “Tyler is not just coaching a sport; he knows the kids, and he’s pushing them to be better in the classroom as well as on the field. Athletic success is giving our students great motivation to excel in the classroom. We have a lot of scholar-athletes.”

Rea is the school’s athletic director.

Rea is equally excited about the Corriher-Lipe volleyball team that recently finished 10-0 under the direction of South Rowan High coach Jenna Horne and the boys basketball team that was 6-2 and co-division champion under Church.

“We do have some good athletes, but we’ve been successful mostly because they’re great kids,” Rea said. “If I tell them they’ll be practicing for an hour and a half, they want to practice two hours. People ask me if it’s hard for me to coach. When you care about kids, it’s not hard.”

Rea was diagnosed with cerebral palsy early in life. Symptoms include impaired muscular development and movement.

Still, he grew up loving sports even when he couldn’t do the things average kids took for granted.

By the sixth grade, cerebral palsy had forced Rea into a wheelchair. That confinement was crushing, as a love for sports was at the center of his life.

Surgery at the Shriners Hospital for Children injected a dose of hope. His legs were straightened. With the assistance of braces, he was able to get back on his feet. While he would never run, he would be able to walk. That was something. That was enough.

Pruitt taught him how to keep a scorebook and showed him the ropes of being a manager. Those things were huge. That made Rea part of something bigger than himself, made him part of a team concept. He could’ve been isolated at school, but now he had a sports family.

“Without sports, I probably would’ve ended up sitting around on the couch,” Rae said. “Sports didn’t just change my life — sports saved my life.”

By the time he got to South Rowan, being an experienced manager and scorekeeper made Rae a welcome asset. He became a member of more athletic families. He became a familiar face on baseball and football fields as well as basketball gyms.

He learned a lot about coaching, a lot about strategy, a lot about sports psychology from a strong group of mentors. South coaches Jason Rollins, John Davis, Thad Chrismon, Jim Brooks and Bryan Withers, among others, made a lasting impact. They gave him a chance. Rea took that opportunity and ran with it, so to speak. He made himself indispensable.

“I wasn’t just managing or keeping the book,” Rea said. “Working for those coaches, I got to live sports every day.”

Living sports? That was the dream.

He was coaching a youth basketball team at the J. Fred Corriher Jr. YMCA before he was out of high school.

When he went to Catawba, he learned more from two head football coaches — Chip Hester, and then Curtis Walker.

While he was still a student at Catawba, he started coaching the Corriher-Lipe boys basketball team.

He headed to Catawba with the idea of majoring in physical education, but that was tweaked to sports management.

He switched from boys to girls basketball three seasons ago and guided a group of girls who went 36-6 in three seasons and won the championship as eighth-graders. Rea’s jayvee girls team also went unbeaten this season.

“The girls love to play basketball,” Rea said. “We talk a lot about being a family and staying together and staying positive no matter what. I always stress defense. If you can play defense; if you can stop people, you can win.”

Willamson is in her first full year as principal, but she was an assistant principal at Corriher-Lipe for three years before that. So she’s seen Rea’s significant impact on the school for a while.

“Our school hasn’t been known for sports, but Tyler has helped raise the level of interest in the school and he’s done a great job of marketing the athletic program to the community,” Williamson said. “In his P.E. classes, he’s constantly talking to kids and encouraging them to try out for a sport. It’s not easy to get a sixth-grader to go out for a sport that eighth-graders are involved in, but he’s getting them out there.”

Baseball and soccer are still ahead in this middle school sports year.

Rea won’t be directly coaching those teams, but he’ll be encouraging them to provide more on-field success and more classroom achievement.

He’s a walking example every day to every student of how to overcome adversity and be successful.

“He’s been a great influence,” Williamson said. “He makes a kid believe they can do it.”