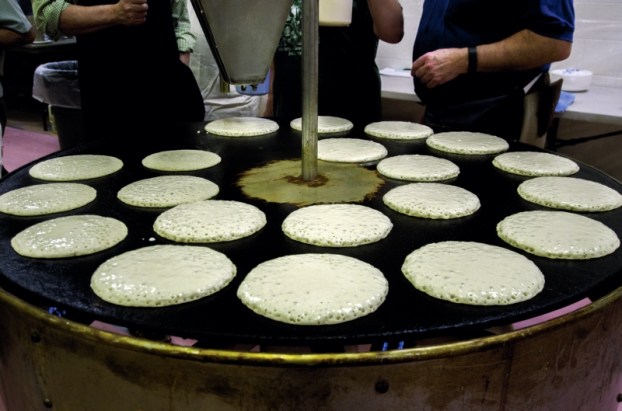 Pancakes cook on a large griddle at an earlier Kiwanis Pancake Festival at the J.F. Hurley Family YMCA. This year's event will be drive-thru, takeout orders only. File photo by Kristi Craven

SALISBURY — Although traditionally held each year in March, the Kiwanis Pancake Festival was moved forward to next weekend to allow more time for improved conditions in the community.

Also, it will be a drive-thru, take-out only event. No indoor seating will be allowed this year for health reasons.

The festival at the J.F. Hurley Family Y begins Friday evening (April 16) from 5-8 p.m. and continues Saturday (April 17) from 8-11 a.m.  Tickets remain $5 per take-out container and can be obtained from sponsors, Kiwanis members or on-site.

The drive-thru route begins at the right rear gate of the Hurley Y, accessible through the parking lot adjacent to Juice Life.  Tickets can be purchased while driving through to pick up individual trays containing pancakes, sausage, butter and syrup.

The Kiwanis Club has designated the festival in memory of Scott Robinson, past president and 33-year member who died in an accident in January.  Robinson joined Kiwanis in 1988 and served as president in 1992. He was a Kiwanis International Legion of Honor member and George F. Hixson Fellow.  He had the idea of moving the event to the Hurley Family Y in 2004, where it remains today. Robinson was also a fixture in the “batter room” every year, churning out the pancake mix for the grills.

The Kiwanis Pancake Festival was started in 1957.  Although take-out containers have always been available, this is the first, and hopefully only, year that the Kiwanis Club is hosting an entirely take-out event. The major fundraising event for the club, approximately $25,000 is raised which is used to fund   children’s charity projects.  Funds are generated from sponsorships, ticket sales and donations. At least 50 commercial and business sponsors are on board for this year.  Major “Grill Partners” include Cloninger Ford & Toyota, F&M Bank, the J.F. Hurley Family Y, the Lettered Lily, Moose Pharmacy, Superior Walls of NC and Vulcan Materials.