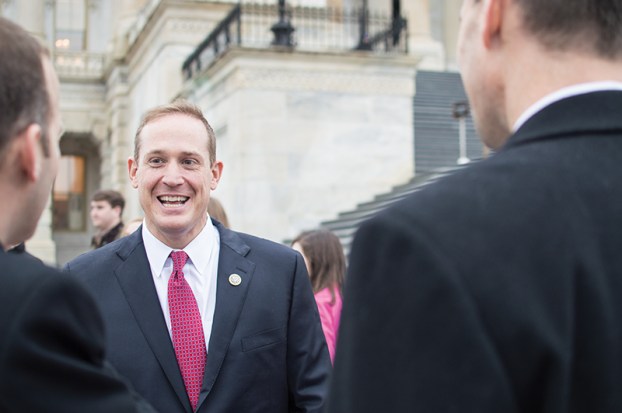 Politicians don’t typically tease an announcement about a bid for office when the answer is something other than, “I’m running.”

Building up anticipation for an announcement that you’re not running is just a lot of work for something that isn’t particularly noteworthy. So, it’s not hard to deduce what Rep. Ted Budd is likely to eventually announce about the U.S. Senate race in 2022.

On the same day the Carolina Journal, a conservative news publication, reported Budd is expected to run for U.S. Senate, the 13th District congressman posted a short video encouraging people to “Sign up to be the first to know my decision.”

“Over the last several months, I’ve had people throughout North Carolina call and visit to encourage me to run for North Carolina’s Senate seat in 2022,” Budd said in the short video posted online. “Well, I’ve listened and Amy Kate (his wife) and I are praying about it. I know that we need leaders in Washington, D.C., who aren’t scared to embrace conservative, North Carolina values. So, as I think about this and how I can best serve our movement, I hope you’ll continue to stick with us.”

If he runs, Budd is likely to face tough competition for a seat currently held by Sen. Richard Burr, who says he won’t seek re-election. Former Congressman Mark Walker, a Republican, is already a declared candidate and has been campaigning for months.

Other Republicans talked about as potential candidates include Lara Trump, the former president’s daughter-in-law, and former Gov. Pat McCrory. That’s just the primary. A competitive field is shaping up on the Democratic side, too.

As Budd looks toward his next race, it’s worth reflecting on his first — the 2016 election for the 13th District — which occurred because of a court order about racial gerrymandering in the state’s congressional map. There was no incumbent because he ran for a seat closer to his home after court-ordered redistricting. The race also occurred in June — after the traditional primary. That meant only those with a deep interest in politics turned out.

Budd notched an unlikely victory against 16 other Republicans with backing from the Club for Growth, a group that spent roughly $500,000 on his behalf. He appeared in TV commercials during important times — something other candidates couldn’t afford and complained about at the time because they knew what it would mean. Budd beat established names and early favorites, including Andrew Brock, who was a state senator for the 34th District at the time. He beat state Reps. Julia Howard, John Blust, Harry Warren and others.

Howard received some help from the National Association of Realtors Congressional Fund, which spent more than $300,000 on her behalf, but it wasn’t enough.

Republicans bemoaned the boost from the Club for Growth afterward, too, because any change in endorsement by the political group likely would have meant a different winner. In a race with 17 candidates and several established names, Budd won about as convincingly as possible, receiving 6,308 votes and nearly double second place.

In a district that favored Republicans and a 2016 election that included Donald Trump among its winners, Budd won the general election, too.

For every local election, the Post works to interview candidates about their positions at the outset. And Budd’s message was clear in 2016.

“My background is very different than the perennial candidates or the career politicians and I’m not running to begin a career either,” Budd said at the time.

He played heavily on the political outsider aspect to his candidacy, not having run for elected office before, and that he lived on a farm in Davie County. Of course, he wasn’t strictly a political outsider. After the primary in 2016, Rep. Richard Hudson said he and Budd had been friends for 15 years. Before the primary, Budd’s campaign received thousands of dollars from Robin Hayes, a former congressman and N.C. Republican Party chairman who later pleaded guilty to lying to the FBI in a bribery case and received a presidential pardon.

During Budd’s first campaign, he spoke about his support for Second Amendment rights and called it a check on government. He talked about cutting government expenditures, eliminating all of the nation’s debt and eliminating duplicate functions within government. He said at the time there’s a “constitutional mandate” for America to protect its citizens from “extremist Islam.” All immigrants should enter the country legally, he said. Budd also said he didn’t support giving citizenship to those who entered the country by illegal means.

Budd has built a record for himself since his first campaign — one that many North Carolinians have eagerly voted for more than once and that others have fervently voted against multiple times. His votes on Jan. 6 to overturn the presidential election results will enough for people to vote against him for the rest of eternity.

But the 13th District race is much different than a statewide contest — where voters are more evenly divided.

If he chooses to run for U.S. Senate, as he seems primed to do, the primary campaign will be tough, but the general election would be Budd’s most difficult yet.

Letter: Salisbury cannot be obsessed with looking back

Thank you, Ed Norvell, for putting a realistic and historic image to the fate of “Fame” in your “My Turn”... read more