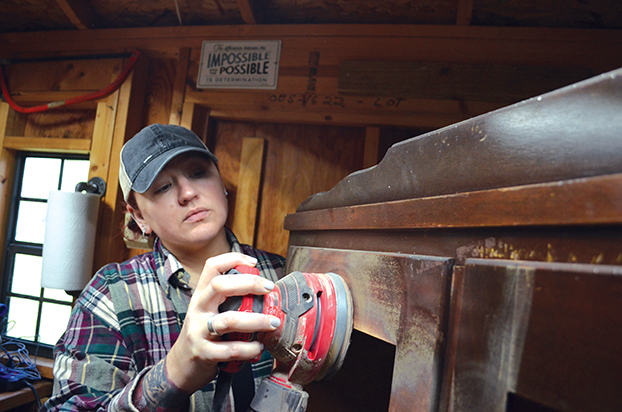 Angela Mills sands down a piece of furniture in her workshop, which was formerly her father-in-law's storage shed. Photo by Maggie Mills.

SALISBURY — Uninterested in the hospital food put in front of him, Jerry Mills wasn’t eating.

The longtime physical education coach at Erwin Middle School and well-known figure in the Granite Quarry community was hospitalized in the fall due to declining health.

On top of his health issues, Mills didn’t have an appetite for the meals nurses were bringing him.

Sitting in the hospital room with him, his daughter-in-law knew exactly what she needed to do.

Angela wasn’t thinking about just any cheeseburger. She was thinking about a burger from Gas ‘n’ Go, a Granite Quarry gas station that also serves burgers and hot dogs. Jerry caught on to her ploy quickly.

With a newfound appetite, Jerry ate the burger, which had been made just the way he liked it — with chopped onions, tomato and just a little mayonnaise.

Jerry and Angela shared plenty of Gas ‘n’ Go burgers together. Most of them weren’t in a hospital but at his home, where Angela visited him almost every day for years, bringing him food she made herself or that she picked up from one of their favorite spots.

During their meals, the two in-laws turned close friends would enjoy long conversations about anything and everything. In the months leading up to Jerry’s hospitalization, their conversations often circled back to one topic — Angela’s future.

For most of her life, Angela held various jobs. She worked in factories and in retail, but nothing ever stuck — until she started refurbishing old furniture. The hobby became a passion and she often discussed it with Jerry while they ate.

“He would always say, ‘If that’s what you like to do, you should do it,’ ” Angela said. “‘If you’re good at something and you like doing it, why don’t you make money doing it?’ ”

After Jerry passed away at the age of 76 in September, Angela knew exactly what she needed to do.

“One day it clicked,” Angela said. “He told me to always do what I love. This is what I love. The way that I can honor him is by doing what I enjoy.”

Angela recently launched her own business called Farmhouse Furniture and Rustic Renovations and is now selling pieces she’s refurbished. She’s also taking orders from customers who wish to have an item restored.

Starting her own business is something Angela has wanted to do for some time, but it wasn’t until Jerry’s passing that she found the motivation.

“My drive is him in my head telling me I can do it,” Angela said.

Hanging on walls of her workshop is a saw used by her father-in-law and a piece of wood with his handwriting on it, both reminders of why she’s in business. Photo by Maggie Mills.

Angela and Jerry first met several decades ago, when she was a student at Erwin Middle School and he was her P.E. teacher. Almost from the beginning, the two shared a special bond.

“Within a few days of being in his class, he was like ‘Your last name is Motley, right? You’re going to be Motley Crue,’” Angela said. “I popped up being my smart self and said ‘Well, if I’m Motley Crue, you’re Mr. Clean.’ He was bald.”

The two continued to joke with each other until she moved on to high school.

Years later, Angela was dating her now husband, Jason. With their relationship starting to get serious, Jason decided to take Angela home to meet his mother. His father also happened to be there.

“The first time Jason took me to his house, I walked through the front door and his dad looked at me and said ‘Motley Crue.’ I said ‘Oh god, it’s Mr. Clean,’” Angela said. “It was crazy.”

The two picked up right where they’d left off, taking playful jabs at each other. But they also started to form a more meaningful relationship. When Jerry’s wife passed away in 2006, Angela started spending even more time with him.

“After my mom passed away and his health started to decline, she was fixing him supper and lunch and stuff,” Jason said. “When I was at work, she would call him and talk to him and go over there and check on him. They would just have long conversations.”

It was during those long talks that Jerry encouraged Angela to start a business around her passion for refurbishing vintage furniture.

That passion started when her biological father, Clyde Motley, brought home an old dresser from an auction. Hoping to give the piece of furniture a second life, Angela transformed it into an entertainment center. 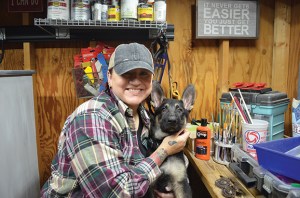 Angela Mills and her dog Captain hard at work. Photo by Maggie Mills.

It was a learning experience.

“That one (dresser) was a frustration thing more than anything,” Angela said.

Still, she enjoyed it enough that when a friend asked her to refurbish another dresser, Angela decided to do it. This time, Angela knew what she was doing and had more fun with the process.

“By the time I was finished, it matched perfectly with what I envisioned,” Angela said. “This was something I could do that I actually enjoyed, sitting there coming up with different ways to make someone happy and do something for them.”

After Jerry’s passing, Angela moved and renovated his old shed. It’s now where she stains cabinets and sands tables. There’s a board with Jerry’s handwriting that Jason nailed above the shed’s door. One of Jerry’s old saws is hanging on the wall. While she works, Angela thinks of him.

“They’re little things that remind me of him and that he’s the reason I’m doing what I’m doing,” Angela said.

Angela is working to open a showroom for her pieces. In the meantime, customers can find her work online at farmhousefurnitureandrusticrenovations.com or by calling 704-925-2488.