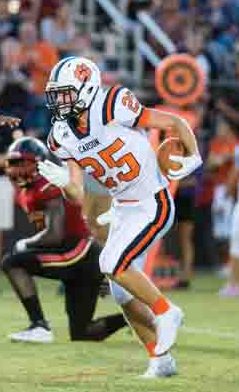 CHINA GROVE — Due to thunderstorm concerns, kickoff for Carson’s season finale/homecoming football game was moved up to 5 p.m., but no one seemed to mind.

Nothing about this COVID-delayed and COVID-shortened season was ever ordinary. This was just a minor inconvenience, one more thing to add to the list.

“We actually did our Senior Night the second week of the season because at that point no one really knew where this season was headed or where it might go,” Carson head coach Daniel Crosby said. “But we were able to honor a special senior class for a second time on Friday.”

It was a game they’ll likely remember as long as they live. Carson’s 56-55 overtime win against South Iredell ranks among the most exciting games in school history.  By far, it was the highest-scoring with 111 total points.

In its 15-season history, Carson had never prevailed in a football game in which it allowed more than 35 points. There was a 42-35 win against Salisbury in 2014, and a 49-35 win against Robinson in 2010, but this one was on a different scale.

“Offensively, we lit it up,” Crosby said. “Just one turnover. Turnovers have been the issue for us. We finally won the turnover battle.”

For almost all of Carson’s seniors this was the last football game they’ll ever play in. That was the biggest motivation in playing well and finding a way to win.

“We saw lightning off in the distance once,” senior quarterback Alex London said. “Everyone was thinking, ‘Oh, man, just let us play this last game. Just let us play.'”

South Iredell tried hard to take away CP Pyle and Carson’s running game, so the Cougars threw and threw … and then they threw some more.

“This was the most pass-heavy game we’ve ever had,” London said. “It was fun. Our offensive line did an amazing job. I had time to sit back there and go through my reads.”

Jake Harris caught two TD passes. Brodie Johnson got one. Easton Mullis got his first TD catch of the season. Carson hasn’t totaled all the stats yet, but London had a career game, probably pushing the school single-game record of 329 passing yards set by Zack Gragg a decade ago.

It was a see-saw game between very even teams. Both would end up 3-4 and 2-3 in the North Piedmont Conference.

Carson led 14-0, trailed 29-28, had an eight-point lead late and needed one more first down to put the game away. But on third-and-4 with 1:40 left,  that single Carson turnover — a lost fumble — occurred.  South Iredell scored a touchdown with six seconds left, added the 2-point conversion, and the Cougars found themselves in overtime at 49-all.

South Iredell got the ball first in OT and scored a touchdown, but this time the Cougars stopped the 2-point conversion.

On Carson’s possession, London had two options on first down, based on what South Iredell’s defense showed —  throw a fade to Harris in the end zone or hand the ball off to Pyle.

“If the corner had been one or two steps closer to Jake, I would’ve looked to throw it, but it was first down, so I played it safe,” London said. “I gave it to CP.”

He’s been handing the ball off to Pyle for a long time, since their middle school days at Southeast. It was the only play Carson needed. Pyle put it in the end zone from the 10.

An extra point would make Carson a winner, and, after several flags, Andrew Beaver kicked it.

“I was proud of our seniors, of all our guys,” Crosby said. “We made so many strides from last season, a big step in the right direction, mostly through a commitment to the weight room.The won/lost record may not necssarily show it, but we got a lot better. A bounce here or there and maybe we’re still playing.”

But the legacy of a 56-55 victory in a season-ended should last a while.

“Why not go out with an overtime win?” London said. “It was just the best way for it to end.”