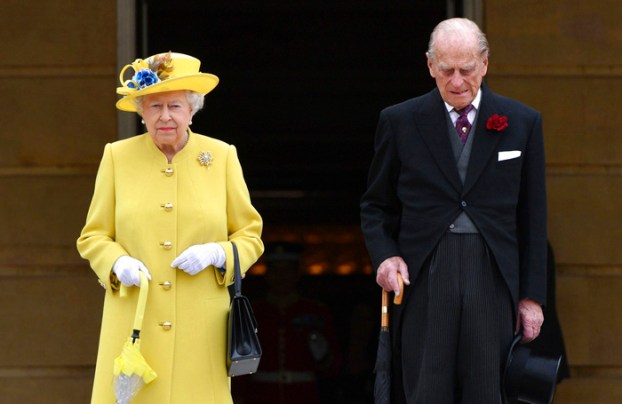 Britain's Queen Elizabeth and Prince Philip are seen at Buckingham Palace in London in 2017. (Dominic Lipinski/Pool Photo via AP/File)

By JILL LAWLESS and GREGORY KATZ

LONDON (AP) — Prince Philip, the irascible and tough-minded husband of Queen Elizabeth II who spent more than seven decades supporting his wife in a role that both defined and constricted his life, has died, Buckingham Palace said Friday. He was 99.

His life spanned nearly a century of European history, starting with his birth as a member of the Greek royal family and ending as Britain’s longest serving consort during a turbulent reign in which the thousand-year-old monarchy was forced to reinvent itself for the 21st century.

He was known for his occasionally deeply offensive remarks — and for gamely fulfilling more than 20,000 royal engagements to boost British interests at home and abroad. He headed hundreds of charities, founded programs that helped British schoolchildren participate in challenging outdoor adventures, and played a prominent part in raising his four children, including his eldest son, Prince Charles, the heir to the throne.

Philip spent a month in the hospital earlier this year before being released on March 16.

“It is with deep sorrow that Her Majesty The Queen has announced the death of her beloved husband, His Royal Highness The Prince Philip, Duke of Edinburgh,” the palace said. “His Royal Highness passed away peacefully this morning at Windsor Castle.”

Philip saw his sole role as providing support for his wife, who began her reign as Britain retreated from empire and steered the monarchy through decades of declining social deference and U.K. power into a modern world where people demand intimacy from their icons.

In the 1970s, Michael Parker, an old navy friend and former private secretary of the prince, said of him: “He told me the first day he offered me my job, that his job — first, second and last — was never to let her down.”

Speaking outside 10 Downing St., Prime Minister Boris Johnson noted the support Philip provided to the queen, saying he “helped to steer the royal family and the monarchy so that it remains an institution indisputably vital to the balance and happiness of our national life.”

The queen, a very private person not given to extravagant displays of affection, once called him “her rock” in public.

In private, Philip called his wife Lilibet; but he referred to her in conversation with others as “The Queen.”

Condolences poured in Friday from statesmen and royals around the globe — many of whom noted Philip’s wit and personality, as well as his service during World War II and beyond.

U.S. President Joe Biden and first lady Jill Biden said the impact of the prince’s decades of public service was evident in the causes he advocated, while Pakistani Prime Minister Imran Khan tweeted that “Britain has lost a wise elder who was imbued with a unique spirit of public service.” Kenyan President Uhuru Kenyatta called him a “towering symbol of family values and the unity of the British people as well as the entire global community.”

French Foreign Minister Jean-Yves Le Drian said his country “celebrates the European and British destiny of a man who, not without panache, served as the contemporary to a century of ordeals and hopes for our continent.” And Greece’s former king, Constantine II, told The Associated Press in a statement that his relative was “a remarkable man who dedicated his entire life to duty and service for his country and the Commonwealth.”

Prince William and Prince Harry marked their grandfather’s death in full-page tributes on the websites of their respective foundations.

British politics was put on pause, with figures from all parties expressing condolences. The government said all official flags would fly at half-staff across all U.K. government buildings.
Over the decades, Philip’s image changed from that of handsome, dashing athlete to arrogant and insensitive curmudgeon. In his later years, the image finally settled into that of droll and philosophical observer of the times, an elderly, craggy-faced man who maintained his military bearing despite ailments.

The popular Netflix series “The Crown” gave Philip a central role, with a slightly racy, swashbuckling image. He never commented on it in public, but the portrayal struck a chord with many Britons, including younger viewers who had only known him as an elderly man.

Philip’s position was a challenging one — there is no official role for the husband of a sovereign queen — and his life was marked by extraordinary contradictions between his public and private duties. He always walked three paces behind his wife in public, in a show of deference to the monarch, but he played a significant role at home. Still, his son Charles, as heir to the throne, had a larger income, as well as access to the high-level government papers Philip was not permitted to see.

Philip often took a wry approach to his unusual place at the royal table.

He frequently struggled to find his place — a friction that would later be echoed in Prince Harry’s decision to give up royal duties.

“There was no precedent,” he said in a rare interview with the BBC to mark his 90th birthday. “If I asked somebody, ‘What do you expect me to do?’ they all looked blank.”

But having given up a promising naval career to become consort when Elizabeth became queen at age 25, Philip was not content to stay on the sidelines and enjoy a life of ease and wealth. He promoted British industry and science, espoused environmental preservation long before it became fashionable, and traveled widely and frequently in support of his many charities.

In those frequent public appearances, Philip developed a reputation for being impatient and demanding and was sometimes blunt to the point of rudeness.

Many Britons appreciated what they saw as his propensity to speak his mind, while others criticized behavior they labeled racist, sexist or out of touch.

In 1995, for example, he asked a Scottish driving instructor, “How do you keep the natives off the booze long enough to pass the test?” Seven years later in Australia, when visiting Aboriginal people with the queen, he asked: “Do you still throw spears at each other?” On one visit to a military barracks, he asked a sea cadet instructor if she worked in a strip club.

Many believe his propensity to speak his mind meant he provided needed, unvarnished advice to the queen.

“The way that he survived in the British monarchy system was to be his own man, and that was a source of support to the queen,” said royal historian Robert Lacey. “All her life she was surrounded by men who said, ‘yes ma’am,’ and he was one man who always told her how it really was, or at least how he saw it.”

Lacey said at the time of the royal family’s difficult relations with Princess Diana after her marriage to Charles broke down, Philip spoke for the family with authority, showing that he did not automatically defer to the queen.

Philip’s relationship with Diana became complicated as her separation from Charles and their eventual divorce played out in a series of public battles that damaged the monarchy’s standing.

It was widely assumed that he was critical of Diana’s use of broadcast interviews, including one in which she accused Charles of infidelity. But letters between Philip and Diana released after her death showed that the older man was at times supportive of his daughter-in-law.

After Diana’s death in a car crash in Paris in 1997, Philip had to endure allegations by former Harrods owner Mohamed Al Fayed that he had plotted the princess’s death. Al Fayed’s son, Dodi, also died in the crash. During a lengthy inquest into their deaths, a senior judge acting as coroner instructed the jury that there was no evidence to support the allegations against Philip, who did not publicly respond to Al Fayed’s charges.

Born June 10, 1921, on the dining room table at his parents’ home on the Greek island of Corfu, Philip was the fifth child and only son of Prince Andrew, younger brother of the king of Greece. His grandfather had come from Denmark during the 1860s to be adopted by Greece as the country’s monarch.

Philip’s mother was Princess Alice of Battenberg, a descendant of German princes. Like his future wife, Elizabeth, Philip was also a great-great-grandchild of Queen Victoria.

When Philip was 18 months old, his parents fled to France. His father, an army commander, had been tried after a devastating military defeat by the Turks. After British intervention, the Greek junta agreed not to sentence Andrew to death if he left the country.

The family was not exactly poor but, Philip said: “We weren’t well off” — and they got by with help from relatives. He later brought only his navy pay to a marriage with one of the world’s richest women.

Philip’s parents drifted apart when he was a child, and Andrew died in Monte Carlo in 1944. Alice founded a religious order that did not succeed and spent her old age at Buckingham Palace. A reclusive figure, often dressed in a nun’s habit, she was little seen by the British public. She died in 1969 and was posthumously honored by Britain and Israel for sheltering a Jewish family in Nazi-occupied Athens during the war.

Philip went to school in Britain and entered Britannia Royal Naval College Dartmouth as a cadet in 1939. He got his first posting in 1940 but was not allowed near the main war zone because he was a foreign prince of a neutral nation. When the Italian invasion of Greece ended that neutrality, he joined the war, serving on battleships in the Indian Ocean, the Mediterranean and the Pacific.

On leave in Britain, he visited his royal cousins, and, by the end of war, it was clear he was courting Princess Elizabeth, eldest child and heir of King George VI. Their engagement was announced July 10, 1947, and they were married on Nov. 20.

After an initial flurry of disapproval that Elizabeth was marrying a foreigner, Philip’s athletic skills, good looks and straight talk lent a distinct glamour to the royal family.

Elizabeth beamed in his presence, and they had a son and daughter while she was still free of the obligations of serving as monarch.

Philip had to give up his naval career, and his subservient status was formally sealed at the coronation, when he knelt before his wife and pledged to become “her liege man of life and limb, and of earthly worship.”

Philip is survived by the queen and their four children — Prince Charles, Princess Anne, Prince Andrew and Prince Edward — as well as eight grandchildren and 10 great-grandchildren.

Katz and Associated Press writer Robert Barr contributed to this report before their deaths.

For AP’s full coverage of the death of Prince Philip go to https://apnews.com/hub/prince-philip