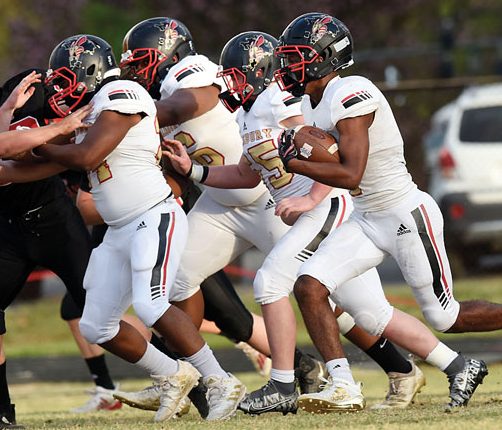 Salisbury's Mike Geter and his line of blockers will be traveling to take on Maiden in the playoffs. Photo by Wayne Hinshaw, for the Salisbury Post

SALISBURY — NCHSAA football playoff brackets were released Saturday evening after a delay because some teams couldn’t play Friday due to weather complications, which led to postponements until Saturday afternoon.

The four classifications are still subdivided for this season — A and AA, depending on enrollment — but this will be the last time for subdivisions for the foreseeable future.

These are lean COVID-condensed brackets, with just eight teams, rather than the 16-team brackets fans have grown accustomed to.

“Normally in 1A in the first-round, you see some byes and some games that are basically warm-up games,” North head coach Nygel Pearson said. “But this is going to be big-boy football right from the start.”

North (4-2) gets to play at home as the No. 4 seed in the 1AA West bracket and will host No. 5 Community School of Davidson (5-2), a school that North previously has encountered in the basketball playoffs.

“There’s nothing like a home playoff game,” Pearson said. “Lots of energy. Lots of excitement.”

The Community School of Davidson Spartans play in a strong public charter school league. Primarily a passing team that throws for 230 yards per game, their losses were to Thomas Jefferson Classical Academy and to Pine Lake Prep.

This is a tossup game. MaxPreps ranks the Spartans No. 201 in the state and North Rowan No. 202. They’re obviously back-to-back in the MaxPreps 1A rankings, as well, with CSOD 19th and North Rowan 20th.

There’s no question, Salisbury is hitting its stride at the right time.

They are the No. 7 seed in the 2AA West bracket and will travel to No. 2 Maiden (6-0). Salisbury, 2AA runner-up in 2019, will take on the undefeated Blue Devils at Thomas E. Brown Stadium.

Maiden is one of the magical names in North Carolina football.

The small town near Hickory, population 3,400 or so, is famous as the “biggest little football town in the world.”

“I’ve heard about  Maiden for a long time, and they’ve got great tradition,” Salisbury head coach Brian Hinson said. “We’ve known for a while that if we got into the playoffs we’d be playing a conference champ in the first round. We made it. Now it’s up to us to make things happen.”

Maiden has thrown the ball well, about 240 yards per game.

Maiden is ranked second in 2A by MaxPreps and 35th statewide. Salisbury is ranked ninth in 2A and 75th for all classifications.

The Rockets’ lone loss was  to 4A Ardrey Kell.

“It’s going to be about a two-hour drive for us by car, a little longer by bus,” West head coach Louis Kraft said. “I’ll be taking a busload of kids up there who have never heard of A.C. Reynolds, but they’ve been a historically strong football school for a long time. I’ve never been there, but I’ve heard a lot about them.”

Reynolds is well-balanced, but leans toward the run.

The Rockets are ranked 16th in 3A by MaxPreps and 58th statewide. West is ranked 39th in 3A and 128th for all classifications.

A.C. Reynolds is ranked almost identically with Statesville. That means West will be an underdog, but it will have a fighting chance if it plays well.

“I’m sure they’re rated better than us and I know they’re good, but not so good that we can’t beat them,” Kraft said. “Only half the usual number of teams made the playoffs, and we’re in there. Everyone who made the playoffs is good.”

One of A.C. Reynolds’ victories was an offensive-minded 63-40 affair with T.C. Roberson (6-1), another Asheville school.

The No. 5 seed T.C. Roberson Rams will be making the trip to Kannapolis to play No. 4 A.L. Brown in the 3AA West bracket.

The Wonders are ranked 23rd in 3A by MaxPreps and 70th in the state. The Rams are ranked 32nd in 3A and 110th for all classifications.

All the head coaches whose teams are still alive were settling in to watch film of their opponents today.

Davie (5-2) was ranked 21st in the state, even before it knocked off West Forsyth on Thursday, but this is a year in which MaxPreps rankings and non-conference results had no affect on determining the playoff field. Davie lost two conference games. That knocked the War Eagles out.

First-round playoff games will be played on Friday, April 16, at the higher seed.

Higher seeds will host each round of the playoffs leading up to the state championships. Second-round games are April 23, with regional championships on April 30.

State championship games are scheduled for May 8.