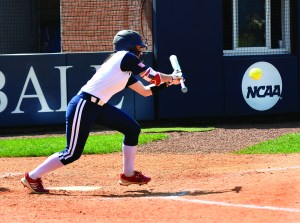 The Indians bolted to a quick lead in the opener with an eight-run first. The first eight Catawba batters reached with Lexi Bryant capping the frame with a grand slam.

That was enough as Brooke Walser (10-4) finished off the complete game. She allowed six runs on 12 hits while striking out six.

Sydney Goertzen collected four hits in the opener with a pair of doubles for the Indians. Gracie Gibson had a pair of hits, including a double.

Jordan Dean hit her 12th home run of the season to put Catawba up 2-0 in the second game. The Cavaliers came back on a two-out, two-run double by McKenna Falwell.

Falwell and Madison Hunter then locked up in a pitchers’ duel as they blanked the offenses for the next five innings. The Cavaliers finally broke through in the seventh when Kara Long led off the inning with a home run.

Falwell (7-7) allowed just one hit after the first inning. She walked two and struck out three in the complete game.

Hunter (5-3) was making her first start of the year and allowed just three hits with five walks and six strikeouts.

Catawba is on the road again on Monday, traveling to Carson-Newman for a league doubleheader at 1 p.m.