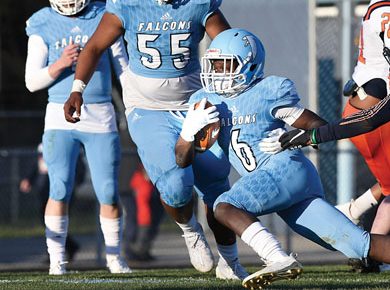 The league title was decided at Greyhound Hollows, where the hosts prevailed in a 17-10 test-of-nerves.

“We just didn’t make the plays when we needed to,” rookie head coach Louis Kraft said, moments after West lost a frantic race to the finish line. “It’s as simple as that. We turned it over too much and that’s something you can’t do against Statesville.”

West (4-3, 4-1 NPC) suffered three rally-killing interceptions in the second half and failed in its bid to win its first conference title since 2011. And though its offense stumbled, West’s defense pitched a second-half shutout while limiting the Hounds to 85 yards.

“It’s over with. We just have to put it in the past,” said mountainous defensive tackle Zeek Biggers. “We gave ourselves an opportunity and put ourselves in position to win. Now we’ll have to try to get our next one in the playoffs.”

West will likely receive an at-large invitation when state playoff pairings on Saturday. Statesville (6-1, 5-0), meanwhile, secured its third consecutive conference championship and should host a first-round match-up next week.

“This was really, really hard,” said winning coach Randall Gusler. “It felt like we had win the game two times, three times. That West Rowan, they’re a bunch of fighters. Who knows? We may end up playing them right back here next week.”

Other than nine encroachment penalties by the Greyhounds, Statesville’s defense held West in check. Quarterback Noah Loeblein completed nine of 24 passes for 146 yards — including a 60-yard touchdown strike to wideout Damon Phillippe late in the first half. It helped the Falcons begin to crawl out of a 17-0 second-quarter crater.

“That was tough,” said Kraft. “But we gave up some big plays.”

The first came when Statesville quarterback Zamari Stevenson (101 yards rushing, 96 passing) scored on a 27-yard draw play less than three minutes into the match. Sam Buckner’s 30-yard field goal stretched the lead to 10-0 early in the second period and Stevenson’s 70-yard stop-and-go TD run put the Hounds up 17-0 with 5:55 remaining in the half.

“We tried not to let them get outside because they were so fast,” Biggers lamented afterward.

West responded on its next possession. On first down from the 40, Loeblein — who delivered a number of surgically precise passes — lofted a soft toss over Statesville’s pursuit that Phillippe snagged in the secondary and turned into a touchdown sprint.

Then in the third quarter, Loeblein steered West to the Statesville 9-yard line. But a third-down misfire set up sophomore Juan Arteaga’s 27-yard field, trimming the deficit to seven.

Although there was no further scoring, both teams threatened in the final stanza. Loeblein was picked off by defensive back Amonte White with 8:43 to play, then fired incomplete on a fourth-and-16 call from the Statesville 23 with 3:17 on the clock. The Greyhounds had a first-and-goal from the West 3-yard line, but were stuffed  by WR’s dirt-eating defense on three straight running plays. On fourth down, junior defensive end Ashton Matthews blocked Buckner’s 26-yard field goal attempt.

“It was a block-right call,” said Matthews, whose partners in crime included Biggers, Josh Noble and James Ball. “Me and James switched sides right before the snap, so I could be on the strong side. I told Zeek and Josh to block away so I could penetrate up the middle.”

Perhaps no one was more impressed with West’s pressure push than Gusler. “All four of those guys played mean,” he said. “And they brought it tonight.”

West still had a healthy pulse as the waning moments arrived. Senior linebacker Nate Estrada recovered a fumble after teammate Mike Gonsalves stripped the ball from running back Ja’zien Harrison-Connor — after the junior had gained seven yards and a first down — with just 2:27 remaining. But West’s final charge up the hill was repelled when DB Kemarri Daniels intercepted Loeblein’s final pass with 1:25 left.

“It hurts right now,” Estrada concluded before jogging to the team bus. “But this finish gave us energy to bounce back next week. We’re gonna beat somebody.”