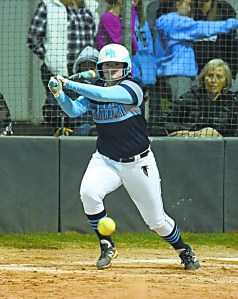 It was 0-0 until the sixth when Emma Clarke led off that inning with a homer for the Falcons. Doubles by Walton and KK Dowling scored another run.

Walton struck out six. She allowed five hits, but didn’t walk a batter.

Caylie Keller also had a double for West.

West had lost to East 2-0 in a season opener. Now West, East and Carson all have one league loss.

It was the  second win of the season for the Raiders.

Kassidy Sechler was 3-for-4 with two RBIs to lead the Raiers. Bailey Yon had two hits. McKinley Faw drove in two runs.

Avery Crowell struck out six and pitched into the sixth inning. Sechler got the win in relief.

South Davidson took a 5-4 lead to the seventh inning.

Crowell’s infield hit tied the game at 5-all.  Faw’s two-run double put the Raiders ahead.