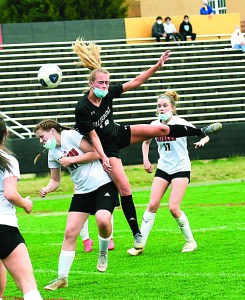 Salisbury (5-0, 2-0)  got three goals from Sutton Webb in the Central Carolina Conference contest.

Piper Muire scored twice, while Caroline Cardelle and Lillie Rusher added a goal each.
Assists were credited to Webb (2), Muire, Rusher and Izzy Banish.
Hannah Schmeltzer and Abigail Perez combined for the shutout in goal.
Salisbury got excellent play from Clara Brown, Kendall Colwell and Stella Koontz.
Next up for the Hornets is another pivotal CCC matchup vs Central Davidson (3-1, 2-0) on Monday. Match time is 6 p.m.
•••
OLIN — Carson beat North Iredell 1-0 on the road in a match that was critical to Carson’s playoff hopes.
Hannah Isley scored the goal, with Lindsey Conrad getting the assist.
Carson (5-1, 4-1) already had beaten North Iredell 1-0 at home on a Riley Isley goal.
Carson stayed a game behind South Iredell. The Vikings pummeled Statesville 9-0.
You Might Like