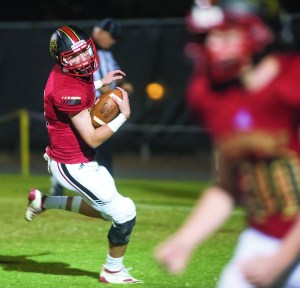 East (1-5) will be favored to close things out with a win at North Iredell, which is still looking for Win No. 1.

Carson has been in every game despite a 2-4 record. The Cougars will be underdogs at home as they celebrate homecoming against South Iredell, but they should be in this one as well. Maybe they’ll get a few bounces. They’re due some.

South Rowan (2-4) will be serious underdogs at home against Salisbury (4-2), which can secure a playoff spot by beating the Raiders.

A.L. Brown is playoff-bound. The Wonders (5-1) have wrapped up the South Piedmont Conference championship and will look to win at rival Concord to complete a perfect run through the SPC.

With a win at South, Salisbury would join North, West and A.L. Brown with guaranteed playoff berth

West lost 17-10 at Statesville Thursday in a game that decided the North Piedmont Conference championship, but the Falcons (4-3, 4-1) project to make the 3A playoff field.

Playoff brackets will be released on Saturday, with first-round playoff games on April 16.

Playoff berths are based on conference records. Neither overall winning percentage nor MaxPreps rankings factor into the playoff format for this school year.

Salisbury played its best game of the season last week in dismantling Ledford 42-6.

Defensively, the Hornets are stout. They’ve shut out two teams and have stopped high-powered Central Davidson and Ledford offenses the past two weeks.

South has allowed 110 points the past two weeks.

South was awarded a forfeit win over the Hornets in 2015, but the Raiders haven’t beaten Salisbury on the field since 2009.

North Iredell hasn’t held anyone in the North Piedmont Conference under 38 points, so the Mustangs, particularly senior back Sammy Pinckney, who will be playing the last game of a record-setting career, should have a field day offensively.

Pinckney has racked up nine TDs this season. He’s rushed for at least 100 yards in every game and has topped 200 yards twice.

The Mustangs threw the ball well in the loss to West Rowan and the win against Carson, but hasn’t had much success in the air the last two weeks. That could change tonight. West Rowan had over 300 passing yards against North Iredell.

The Vikings employed a power running game against West Rowan, with very little passing, but then they hurt East with some big pass plays in the first half when they beat the Mustangs.

South Iredell looks to be at its best running the ball with some large people carrying.

CP  Pyle exited the 48-28 loss to West Rowan last week with back tightness, but could be back in action tonight. He has 436 rushing yards and 211 receiving yards, so he’s a critical element in Carson’s offense.

Alex London threw for 241 yards in the loss to West and has 1,131 passing yards. Jake Harris, Emory Taylor and Brodie Johnson have been major receiving threats, along with Pyle.

Defensively, the Cougars have allowed 40-plus points three straight weeks, and it’s hard to win those.

Carson’s offense has put the defense in some tough spots with a lot of turnovers, including six in the loss to Statesville.

One of the state’s best rivalries has been dead-even over the years.

There’s been a Kannapolis-Concord game every football season since 1931, and both have towns have claimed bragging rights 42 times — plus four ties.

The Wonders have won two of the three playoff meetings.

Concord is still down and took its only South Piedmont Conference win against new school West Cabarrus.

A.L. Brown has already clinched the league’s “1” seed for the state playoffs and will be looking to beat the Spiders for the sixth straight time.