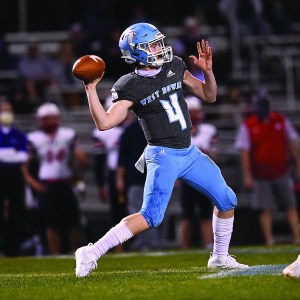 West Rowan QB Noah Loeblein has put up big numbers the past two weeks. Photo by Wayne Hinshaw, for the Salisbury Post.

The West Rowan at Statesville football game that will decide the North Piedmont Conference championship has been moved up from Friday and will be played tonight at Greyhound Hollow at  6:30 p.m.

Statesville (5-1, 4-0) is explosive and thrives on big plays more than long drives. The Greyhounds were in a 10-10 tie with Carson in the  third quarter. Two minutes later, Statesville led 30-10.

Statesville had 400 yards of offense against East Rowan last week.

West (4-2, 4-0) opened the season with lopsided losses to Salisbury and Davie, but has gotten better since then.

West’s strengths have been the defensive line and the passing game.

Noah Loeblein has thrown for 566 yards and eight TDs in West’s last two games. He has 13 TD passes for the season. Damon Phillippe and Andrew Kennerly have combined for nine TD catches.

West has lost its last four meetings with the Greyhounds, including a 27-24 OT decision in 2019.

West’s last win in the series came in 2011, which was also the last season in which the Falcons won the conference championship.

West Rowan’s Taylor Walton and Hezekia Newby from Eastern Guilford are recipients of the NCHSAA Performance of the Week award.

Walton, a senior on the West softball team, struck out 22 batters and allowed only one earned run in 18 innings pitched last week.

Walton contributed at the plate batting .556 with two RBIs.

Carlee Patterson (45) and Emma Callahan (48) were the other scorers for the Mustangs, who won the nine-hole event by 38 strokes. North Rowan placed second, while South Rowan was third. West Rowan and Salisbury didn’t register team scores, and Carson didn’t have any participants.

A story and photos are online.

It was the first career goal for Banish, a freshman.

Assists were credited to Lillie Rusher (3), Banish (3), Cardelle and Webb.

Next up for the Hornets is CCC rival West Davidson on Thursday afternoon. Game time is 4:30 to be followed by jayvee football against South Rowan.

Anna Mead and Brittany Vanhoose scored two goals each for West Rowan in a 5-1 North Piedmont Conference win against Statesville on Tuesday.

Mia Arntsen also scored for the Falcons.  Lauren Corriher had three assists, and Alyssa Graham had one.

Makayla Borst scored the only goal for Carson in a 4-1 NPC loss to South Iredell on Tuesday.

A story and photos are online.

Ellie Wilhelm homered for the Cougars.

Mallory Link had both hits for the Hornets.

Kady Livesay had for RBIs in Oak Grove’s 15-0 win against Salisbury on Wednesday.

Karley Queen had three RBIs  for Davie in a  7-2 Central Piedmont Conference  win over West Forsyth on Tuesday. Kaylyn Nuckols and Chesney Shook did the hurling.

West Rowan outscored Davie 10-7 in a non-conference game on Wednesday.

Emma Clarke homered, scored three and drive in three to lead the Falcons.

Audrea Fowler homered and drove in three for the War Eagles.

Catawba College Volleyball will have a Beach Academy League this summer from May 17-26.

It will include a shirt, 11 practices and two Saturday tournaments. There will be two groups, beginner (ages 8-13) and intermediate (ages 13-17).

For more details and registration go to: https://www.highperformancevolleyballtraining.com/content/beach/beach-academy-league.

If you have any questions, please contact Catherine Griffith at cgriffit21@catawba.edu.

Sewanee’s Wesley Porter (East Rowan) recorded six tackles, one for a loss, and added a 53-yard interception return and a fumble recovery in Saturday’s 24-21 loss to Greensboro College.

Belmont Abbey’s Mackenzie Sprinkle (East Rowan) has a hit in her last four games. She hit a home run against Emmanuel.

Catawba forward Hannah Dunn was selected as the conference Freshman of the Year, and Catawba head coach Nick Brown was voted as the Coach of the Year.

Coker scored with 11 seconds remaining in the first overtime period to take a 13-12 victory over host Catawba (5-6, 4-4) in South Atlantic Conference men’s lacrosse action on Wednesday night at Shuford Stadium.

Tucker Fanzo finished with four goals and an assist for the Indians.

Two teams tied for first  in the First Flight with a minus-10.

The Second Flight  winner was the team of Ken Safrit, Tom Talbert, John Goodman and Allen Hammill with a minus-12.

Third Flight winner was the team of Ralph Luther, Dicky Peeler, Larry Luther and Bobby Clark with a minus-10.

Longest putt on No. 9 was made by Donnie Burris. Closest to the pin on No. 2 was won by Gary Hahn.

Cauble, Scearce, Jordan and Rogers eagled the par-5 No. 18 hole