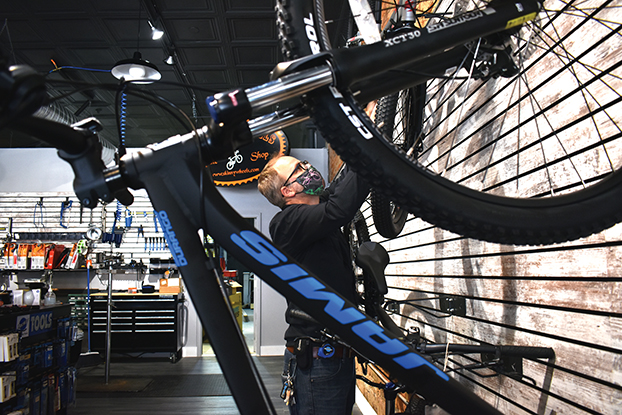 SALISBURY — For the past couple months, the glass windows of Skinny Wheels Bike Shop have been covered in paper.

Walking or driving by those windows, Elaine Butler kept waiting for the paper to come down and for the store to reopen for in-person shopping.

“I kept saying, ‘Man, I hope they open up soon,’” said Butler, a loyal customer of the shop for about five years.

On Saturday morning, just a few days after renovations were completed, Butler walked into a shop that she almost didn’t recognize.

“It looks awesome,” Butler said. “It really does.”

Renovating his bike shop at 111 W. Innes St. has been on Eric Phillips’ to-do list since he officially purchased the downtown building about two years ago. Phillips had been leasing the space since Skinny Wheels moved from its Mocksville location to Salisbury about a decade ago. 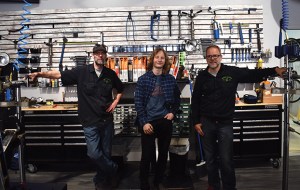 Usually a slow season for cycling due to the cold weather and with inventory shortages due to a pandemic bike boom, Phillips decided in early January that it was the right time to renovate. Once the process started, things became a little bit more complicated than anticipated. What was supposed to be a two-week, temporary closure turned into more than two months.

“The scope of the project expanded of course,” Phillips said. “When we started getting into stuff, we realized we needed to fix this, fix that. We were spending the money, so we thought we’d do it the right way.”

During the renovation, Phillips continued to operate the shop’s online store and serviced customers however he could. That meant fixing bikes in his home and delivering them himself. While Phillips didn’t mind doing what it took to keep customers happy, he’s excited to be able to repair broken chains or busted tires from the shop once again. 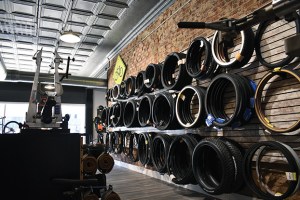 The dozens of bike tires that were formerly in storage above the shop are now displayed neatly on a wall in the store’s showroom, hanging below recently exposed brick walls. Ben Stansell/Salisbury Post

The repair station was previously behind the store’s back wall, making it difficult for Phillips or one of his employees to know when a customer entered the store and needed help. During the renovation process, Phillips moved it out into the showroom.

“We decided to put it out here so when people walk in we can continue to wrench and engage our customers at the same time,” Phillips said.

In addition to the bike repair station now being behind the checkout counter, the shop’s roof was fixed and the building’s natural brick walls were exposed. The lighting is improved and there are a few more decorations, including a stop light his wife bought seven years ago at a flea market and the original Skinny Wheels Bike Shop sign — both of which were in storage.

One wall of the shop is now full of tires that were upstairs. Another is covered in new Jamis mountain bikes.

The demand for bikes that spiked during the start of the pandemic has continued into 2021, Phillips said. With demand so high and inventory low, it’s still difficult for him to get his hands on new bikes and some cycling equipment. 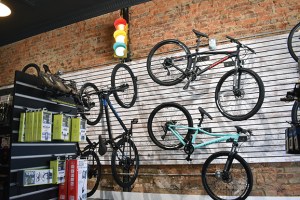 Keeping his shelves stocked with bikes has been a challenge for Eric Phillips since the pandemic spurred a boom in the bicycle industry. Ben Stansell/Salisbury Post

The new Jamis bicycles hanging on the store’s walls were ordered in September, but didn’t come in until February. Once they’re gone, Phillips said, it’ll be hard for the shop to get new mountain bikes until 2022.

“Inventory is still spotty. There’s still worldwide a boom,” Phillips said. “It’s still going on. There were a lot of new people getting into it last year. All the bikes everywhere around the world were sold out and they’re still hard to get.”

While Phillips is happy with his shop’s new look and feel, he’s most enthusiastic about being able to help customers in person once again.

“There’s certain things people come into a shop for,” Phillips said. “We can provide a little bit more personalized support and information that they might be able to find on their own.”