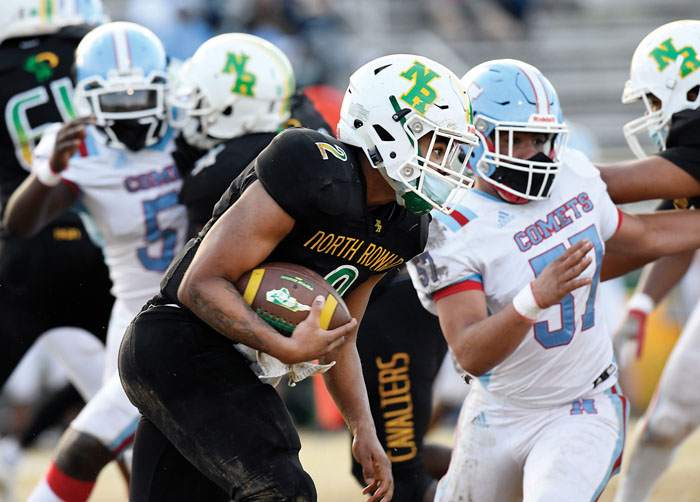 North Rowan's Kyree Sims has scored a dozen touchdowns for the Cavaliers this season. File photo by Wayne Hinshaw, for the Salisbury Post

McArthur had another TD reception called back by a holding penalty.

“We got our passing game going, and that was big as we get ready for the playoffs,” said North head coach Nygel Pearson. “Kyree had a good night. We hit some deep balls.”

Sims scored from 20 yards out very early in the game.

Sims hit McArthur with a short pass with 4:43 left in the first quarter, and the rangy sophomore broke tackles down the North sideline for a 60-yard scoring play.

South Davidson had the ball late in the first half and appeared certain to get to halftime with a 14-0 deficit, but a North interception was followed by a 70-yard TD run by freshman Jaemias Morrow in the closing seconds of the half. Sims’ two-point conversion run made it 22-0 at the break.

“That interception and score at the end of the half — that was it,” Pearson said.

Sims’ 10-yard TD pass to Harris and a 20-yard connection with McArthur bumped the Cavaliers’ lead to 36-0.

Sims broke his long one for 44-0. Then Morrow turned the corner on the left side for the TD that made it 52-0 with 4:24 remaining.

North’s final trip to the end zone came on defense with Kam Cuthbertson scoring on a 50-yard pick-six.

“We have a lot of guys playing well on defense,” Pearson said. “Delaney was all over the place. Krider had several sacks. Cuthbertson has really been coming on. He made some great tackles as well as getting the pick-six.”

North will take a day off from practice today and will have quite a bit of preparation time as it gets ready for the playoffs.

Pairings are expected to be released on Saturday. North Rowan will be in the playoffs as the “2” from the Yadkin Valley Conference. North Stanly won the league.

It will be North’s final Yadkin Valley Conference football game for quite a while. The Cavaliers will be one of the three 1A schools in a seven-team 1A/2A league this fall when realignment takes effect.

South Davidson will also be in that league, along with Thomasville, East Davidson, Lexington, Salisbury and West Davidson.