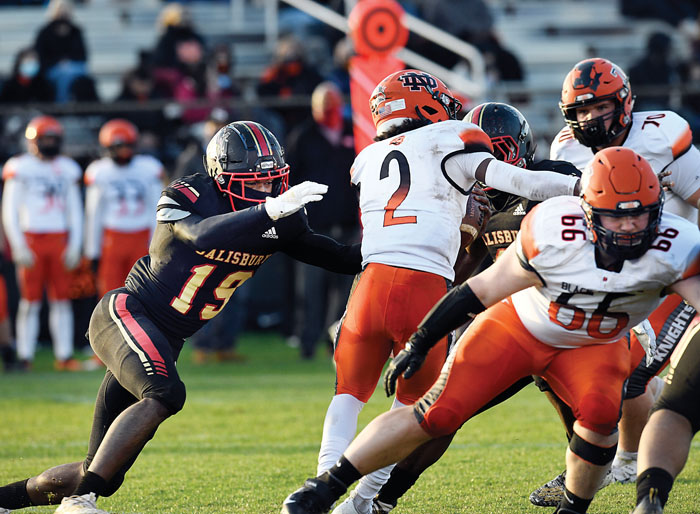 Salisbury’s Brandon Broadway (19) during a game against North Davidson on March 19. photo by Wayne Hinshaw, for the Salisbury Post

That tackle for loss led to one more punt in a nightmarish first half for the Panthers, who never could get anything going offensively at Ludwig Stadium. The visitors took a 42-6 pounding from the rapidly improving Hornets (4-2, 3-2), who will be in the state playoffs if they win at South Rowan on Friday.

The rangy guy who made the third-down hit against Ledford — 6-foot-1 senior Brandon Broadway — looks like a strong safety, but he’s definitely a defensive end. He enjoys proving that every week.

“I’m kind of skinny for the line, I guess,” Broadway said. “But if you do the right things and play your heart out for the team you can do it.”

Broadway’s dream is to get to 200 pounds. He’s at 193.5 right now. Yes, 193.5. That half-pound is important to him. It’s hard to keep the weight on during football season, even a shortened spring season.

Broadway has competed in track and field and wrestling, but football is his passion.

He came to the sport relatively late. He didn’t play football in the youth leagues.

“My first football was at Concord Middle School,” Broadway said. “Seventh grade. Running back. But that didn’t work out so well.”

He eventually became a defensive lineman. He returned to Salisbury — the city where he was born — prior to his junior season.

The Hornets coaching staff was glad to have him, but was skeptical that he could play on a defensive line where they have some large, thick guys.

“We tried Broadway as a DB and wide receiver and tried him as an outside linebacker,” Salisbury head coach Brian Hinson said. “Those positions weren’t the right fit.”

Hinson told the story of how the Hornets were coming out flat after standard warmups last season, so they shook things up some, incorporating vigorous one-on-one drills to get the intensity level up. During one of those drills, Broadway got down in a three-point stance and breast-plated the guy across from him, driving him backwards 5 yards.

“Everyone got jacked up,” Hinson said. “And we realized that while he might not look like it, Broadway was a defensive end.”

Broadway got most of his action last season on special teams.

“That was my role, so I tried to be great on special teams,” Broadway said. “Poured my heart into it.”

As the 2019 season went on, especially during the long playoff run, he was getting more snaps on the defensive line, as the deep Hornets rotated fresh bodies. He made three tackles and recovered a fumble in the loss to Shelby in the 2AA state championship game.

With Blaine Shellhorn graduating, the Hornets moved Broadway into a starting spot at defensive end, and he’s been up to the challenge.

“He’s done the job,” Hinson said. “Physically, he’s a lot stronger than he was in 2019, And when you combine that added strength with his quick get-off and a lot of effort you’ve got a good player.”

Broadway is a student of the game. He’s learned new moves as a pass-rusher and he’s been putting them to use.

He’s been impactful, especially the last two weeks. He said he’s been inspired by some good pregame speeches.

He had two tackles for loss against Ledford against the run game, plus a sack and a half. He was also credited with two QB pressures.

“He came off the edge, flattened out and got straight to the quarterback on one play,” Hinson said. “Textbook sack. You can’t do it any better.”

Ledford’s only score came on a kickoff return. Ledford has a solid team with a nicely balanced offense that put up 421 yards the previous week against stout Oak Grove.

But Salisbury shut the Panthers down. On 15 passing attempts, Ledford netted a meager 25 yards. On 35 rushing plays, Ledford got 85 yards. Ledford back Christian Franklin is way above average, and he had an 18-yard run against the Hornets. On his other 21 carries, he totaled 23 yards. He was running into human brick walls, some of them thick, but some of them on the lean side.

Broadway likes to hear lockdown numbers like that. He knows he made mistakes on Thursday — he was given a 74% grade by the coaching staff — but usually he will out-work or out-quick his mistakes.

“I like that people look at me and don’t think I can make plays on the defensive line,” Broadway said. “I like it that people say I’m not big enough. That’s my motivation. Every game, I have the mindset of going out there and proving that I belong.”

Spring training wraps up: Soroka returns to mound for…