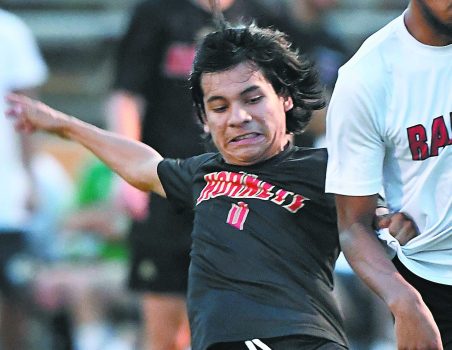 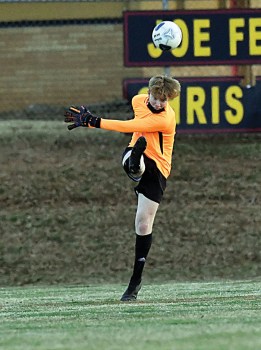 SALISBURY — In a peculiar and condensed boys soccer season, one thing stayed the same. 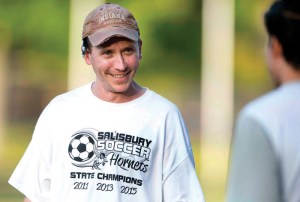 Parrish is the coach of the year one more time.

As co-players of the year from his squad, Parrish went against the grain. Salisbury had scorers, notably Will Webb and Colin Donaldson, but Parrish recommended his goalkeeper, junior Wade Robins, and the 5-foot-6 senior center back, Juan Garcia Cortes, who led and helped bring an almost brand new bunch together.

“They both had one goal and one assist,” Parrish said. “So they weren’t guys that can be measured by normal stats, but they were guys who were the most impactful on our successful season. Juan learned a lot by having an older brother (Bryan) in the program to watch and learn from. He was kind of a leader by default on such a young team, but he turned out to be a great one.”

To put the Hornets’ 2021 season in perspective, they were coming off a 16-8 year in 2019, a downer by their lofty standards, and they had just three seniors on the roster.

That means a rebuild just about anywhere, but especially in a league that is extra competitive in boys soccer.

“There was a lot of yelling and screaming in the early days,” Cortes said. “Guys had to learn new roles. Some of these guys had been big dogs on teams they’d played on, but high school soccer is a different story. In the league we play in, you’ve got to play together.”

Salisbury was thinner and younger than normal. Usually 30 come out for soccer. This time there were 18. Nine were freshmen. Parrish kept them all.

“We’d lost 82 percent of our scoring and had lost 13 or 14 guys to normal graduation, to early graduation or to jobs,” Parrish said. “We faced the same preparation challenges that everyone did. Limited time to get ready because of COVID, and then horrible weather. It rained every other day.”

Players such as Webb and Donaldson supplied goals and freshmen such as  Yahir Aviles and Carlos Henriquez proved they were ready for prime time as soon as the season started for Salisbury on Jan. 28.

It wasn’t always smooth. On Feb. 24, there was a 3-0 loss to an Oak Grove team that lost 10-1 to Ledford and would finish seventh in the 10-team CCC. But the Hornets learned from it. They got better.

“I did my best to try to lead,” Cortes said. “I tried to keep the communication going with our keeper, the backs, the midfielders and the strikers. I tried to keep my team organized. If people messed up, I told them they messed up, and I told them them to do the same for me if I messed up. It was the craziest season I’ve ever experienced, but we learned to hold each other accountable.”

Robins was a rock, starting on opening night at CATA. He got clobbered, had blood dripping from a knee, but stayed in. He knew the Hornets didn’t have a backup.

“Robins improved as much in one calendar year as any player I’ve ever had,” Parrish said. “He did a complete 180, improved his attitude, his ability and his production. He upped his game. He had tools when he was a sophomore, but as a junior he learned to use those tools. The change in his mental toughness, I can’t take any credit for that. He did that on his own. But once that light switch went on for him, there was no turning back. He was amazing, at times, with three new starters on the backline in front of him. If he allows one more goal per game than he did, we’re a .500 team instead of tying for second place.”

Robins says most of his growth took place between his ears.

“I was in better shape, quicker, able to get to more balls so there was some physical improvement,” Robins said. “But the big change sophomore season to junior season was mental. In the past when I made an error, it led to more errors. This season if I made a mistake, it didn’t linger. I was able to move on from it. I kept my head up and stayed confident that I could stop the next shot.”

Usually, he stopped it.  Robins allowed 15 goals for the season and only nine in Salisbury’s nine CCC contests. He posted six shutouts.

The defining game for the Hornets in many ways was the road contest at Ledford on March 2. Ledford was the defending CCC champ and had been destroying opponents. Salisbury was less than a week removed from the disastrous outing against Oak Grove.

“Ledford was a high-scoring team, but  talked before the game about proving that we were equal or better than Ledford,” Cortes said. “Then we put one in the back of the net early and everyone started believing we could do it.”

Ledford outshot the Hornets 28-9, but Robins recorded 17 saves and Salisbury managed a 3-all tie with the eventual league champs. It was a tie that was a win.

“That was definitely an exciting game,” Robins said. “I knew I wasn’t going to keep them from scoring, but if they scored, I was going to stop the next one. My goal was to keep us in it.”

Robins handles the placekicking and kickoffs for Salisbury’s football team, so he’s been busy.

“It’s been fun, but it’s been a challenge,” Robins said. “Striking a soccer ball and a football are two completely different things.”

Late in the season, Salisbury headed to Belmont to play South Point in a first-round playoff game.

That was another night they’ll all remember — a 2-1 victory.

“I was excited about how well we played,” Robins said. “Just an excellent team performance to beat that team on the road.”

Parrish is closing in on 200 wins at the helm of the Salisbury boys program and has guided three 2A state champions and a runner-up.

Compared to some of his teams, this latest crew wasn’t one for the ages, but it was still special for posting a winning season in a challenging, unprecedented environment.

“First of all, I was just glad we got to play,” Parrish said. “Every one of our guys sacrificed something to be out there, and we competed really well. In all respects, it was satisfying.”