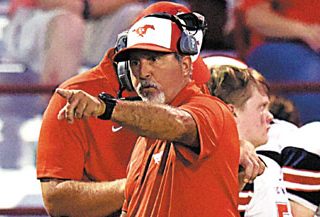 East Coach John Fitz gave credit to Statesville after the loss. 'They made some athletic plays because they're athletic,' he said. — File photo by Wayne Hinshaw, for the Salisbury Post

GRANITE QUARRY — East Rowan’s one-and-only game in Granite Quarry this season was nothing to write home about.

The Mustangs — who have spent more time on the bus than the Partridge Family — were no match for two-time defending conference champion Statesville in Friday’s 41-17 NPC setback. They turned the ball over three times in the first half, dug themselves a four-touchdown deficit and never fully recovered.

“What happened in the first half?” coach John Fitz responded after East (1-5 overall) lost its second straight and fell to 1-3 in league play. “We couldn’t move the ball offensively, we got no field position and our defensive kids were on the field all night. A freshman corner got run past for a touchdown. And they made some athletic plays because they’re athletic.”

The subpar performance tarnished East’s homecoming and senior night celebrations — and doused any hope it had of securing an at-large playoff berth. In a choppy game that saw more flags than the United Nations building, 24 penalties were assessed and more than 250 yards stepped off.

“Well, honestly I didn’t think we played real well tonight,” winning coach Randall Gusler said after the Greyhounds (5-1, 4-0 NPC) notched their fourth consecutive win and remained tied for the conference lead. “We had some bright spots, but then we had some plays that didn’t go the way we planned them. Lots of flags, we had some unsportsmanlikes, but the refs called what they saw. They always call the games as best they can.”

East was limited to 174 yards total offense, with scatback Sammy Pickney accounting for 124 of them. A rocket booster in cleats, he was held to 39 yards on 13 first-half attempts before reaching the end zone twice in the second half.

“They were really keying on me,” he offered. “I heard a lot of ‘Watch No. 2, watch No. 2,’ coming from their defense. Their linebackers were knifing a lot, cutting off my holes before I could get there. My line gave me some holes, but I was a little slow getting there.”

Statesville was led by quarterback Zamari Stevenson, a junior who passed for 136 yards and two touchdowns in the opening half, lifting the Hounds to a 27-0 lead at the break. Teammate Ja-zien Harrison-Connor, a junior running back enjoying his first varsity season, bulldozed his way for 212 yards on 24 carries and a pair of scores.

“I think we weren’t in the zone right away,” said East defensive end Matt Downing. “It took us a while to figure out what their game-plan was. But that No.5 (Harrison-Connor), he had some speed on him.”

So did Pinckney, eventually. He finished with a pedestrian — for him, anyway — 124 yards on 24 totes and got the Mustangs on the scoreboard with an 18-yard TD run midway through the third quarter. “We made some adjustments,” Fitz said. “And Sammy, or any running back, isn’t going to hit the hole every time like he supposed to. But he did a better job of it in the second half.

Much of the excitement Pinckney’s score generated was diminished nine seconds later when Statesville’s Dantell Carter returned the ensuing kickoff 65 yards for a touchdown and a commanding 34-7 lead. East pushed closer when Cole Eagle booted a 20-yard field goal and cut it to 34-17 when Pinckney smashed into the end zone on a 7-yard run with 3:54 to play. Statesville added a rub-it-in TD when Harrison-Connor emerged from a scrum, found some daylight and sprinted 25 yards for a touchdown in the final minute.

“It was a rough start,” said East receiver Vincent Jones. “Last week (a 32-15 loss at South Iredell) was a rough game and I think that may have carried over. We start slow and finish fast. That’s what we’ve been doing all season.”

When it ended — and a handful of seniors had played their final game in GQ — emotions were mixed. “We just weren’t as prepared as we should have been,” said offensive tackle Josh Samoa. “Still, I wouldn’t want to play ball with anyone else.”

Perhaps Pinckney, the owner of 31 career touchdowns, said it best: “I found a brotherhood with this team,” he smiled. “And that’s what I’m going to miss.”

NOTES: East closes its season at winless North Iredell next Friday. … Pinckney’s touchdowns were his eighth and ninth of the spring. … Downing wore the Homecoming King sash after the game. Classmate Gracie Solomon was named Homecoming Queen. … East’s Tayron Frost and Aiden Schenck had fumble recoveries. Teammate Josh Roman-Soto intercepted a pass at the Statesville 30-yard line in the fourth period. … Statesville hosts West Rowan (4-2, 4-0 NPC) for the conference title next week.