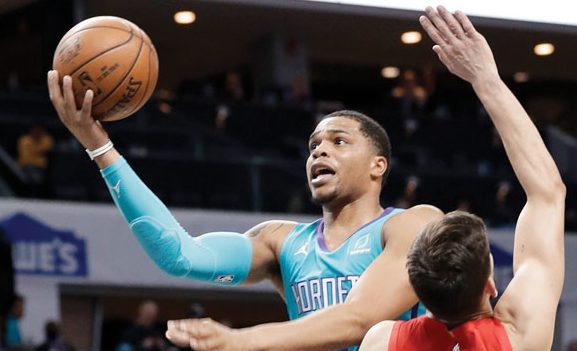 By PHILLIP B. WILSON

The Hornets got double-digit scoring from seven players. Charlotte was without two starters and lost guard Gordon Hayward for the second half to a right foot sprain.

Bridges scored 16 of his points in the second quarter, and a 3-pointer in the final seconds gave the Hornets a 60-49 lead at halftime.

Cody Zeller scored 17 points and Terry Rozier 15 for Charlotte, which has won five of seven.
Hayward got the Hornets off to a fast start with 12 points, six rebounds and six assists in the first quarter. The Hornets, who managed just 11 first-quarter points in a Thursday loss at Brooklyn, took a 28-24 lead.

Not having point guard Malcolm Brogdon due to a sore hip translated to sloppy ballhandling as the Pacers committed 20 turnovers, twice as many as the Hornets.

The Pacers fell to 8-14 at home, which includes losing eight of nine at Bankers Life Fieldhouse.

Pacers: Dropped to 10-19 since a loss to Charlotte on Jan. 27. … All-Star forward Domantas Sabonis missed the final quarter with a left ankle sprain.