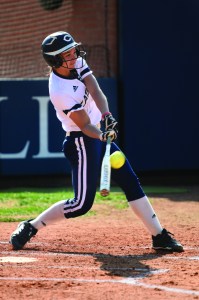 Catawba battled back from a 3-0 deficit after the first inning of Game 1. Down 4-2, Jordan Dean tied it with a two-run homer in the fifth.

Katelyn Jones reached on an error to start the Catawba sixth and would get to third on a single by Sydney Goertzen and an error. Jones scored on Brawley’s ground out to second to put the Indians up 5-4.

Brooke Walser (9-3) got the win. She surrendered six hits with a pair of walks and four strikeouts. Brawley and Dean each had two hits each.

Catawba fell behind 2-0 in the second game after a two-run single by Makayla Barneycastle, but tied the game behind two RBIs from Sommer Gray. The freshman singled home a run in the second and hit a sacrifice fly in the fourth.

Newberry used a Catawba error to score twice in the fifth before Catawba tied the game in the sixth. One run scored on a ground out by Goertzen; the other on a wild pitch. The Wolves went right back on top in the seventh, scoring on a single by Simonds and a ground out by Toni Rose.

Catawba got a pair of two-out hits from Allie Baker and Bailey Benton to tie the game in the bottom of the seventh.

Reagan Glanz gave Newberry a 7-6 lead with a single in the eighth, but again Catawba came back. Gray beat a throw home on a groundball to second to tie the game, and Goertzen beat a throw to the plate on a grounder to third by Gibson to end the game.

Madison Hunter (5-2) earned the win in relief. She gave up three runs (one earned) on three hits in three innings.

Catawba hosts Wingate in a SAC doubleheader on Wednesday at 2 p.m.

Gonzaga freshman banks in shot at buzzer to edge…