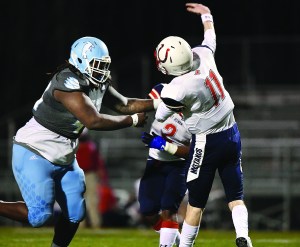 West Rowan tries to stay unbeaten in the North Piedmont Conference tonight, with a dangerous Carson team heading to Mount Ulla for a 6:30 p.m. kickoff.

East Rowan finally gets to play a game in Granite Quarry, after having a home game with West Stanly canceled and another “home game” played on the artificial turf at A.L. Brown. That’s the good news. The bad news is a talented Statesville team is visiting.

The story for Carson has been turnovers — minus-10 in the Cougars’ three losses.

Carson has put up 71 points in its last two games, but still dropped two critical conference games to East Rowan and Statesville.

Carson QB Alex London has thrown nine TD passes. CP Pyle has been one of the county’s top rushing/receiving threats.

West has won three in a row after being slugged by Salisbury and Davie in its first two games. The Falcons turned in their most complete effort so far last Friday when they crushed North Iredell 44-0.

Noah Loeblein has thrown 10 TD passes in his four games (he missed the opener due to basketball), including five against North Iredell and four against East Rowan. West has become increasingly air-oriented to take advantage of Loeblein’s passing ability.

West is ranked 37th in 3A, while Carson is ranked 65th, but this still shapes up as a competitive game. It’s not like anyone has blown Carson out. If Carson breaks even in the turnover battle, it could get exciting.

Statesville remains tied with West Rowan for first place in the league.

Statesville has lost only twice in the NPC in four seasons. Both of those losses were to South Iredell.

East is 2-14 all-time against Statesville.

While East hasn’t beaten the Greyhounds in this century, running back Sammy Pinckney gives the Mustangs a chance to knock off anyone. Pinckney had 169 rushing yards and two TDs, his sixth and seventh of the season, in the 32-15 loss to South Iredell on Saturday.

Despite its record, East has been in every game this season and could be inspired tonight playing for the first time this season in Granite Quarry.

East wraps things up next week at North Iredell in  game it will be favored to win.

Statesville will be hosting West Rowan next week.

South was overwhelmed last week, got down 20-0 against North Davidson in a hurry and lost 54-7.

Central Davidson also is in a bounce-back mode after being shut down by Salisbury.

Central Davidson may not throw a single pass tonight, but the Spartans still will be tough to stop with a grinding, physical ground attack.

South has relied on the athleticism of QB Nathan Chrismon and RB Jackson Deal  to generate most of its offense. Deal scored the only TD for the Raiders last week.

Both teams are still mathematically alive to make the state playoffs, although it’s a longshot for both in a league that includes North Davidson, Oak Grove and Salisbury.

South finishes the regular next week as a big underdog against Salisbury, while Central will be favored to win against West Davidson.

There aren’t any easy nights in the CPC.

Davie averages 471 yards per game and probably has provided as much excitement as any team in the state with 62-43 and 49-40 league wins, as well as Monday’s 53-46 loss to Glenn.

These teams are ranked 18th and 19th in the state (for all classifications) by MaxPreps, so it appears to be another tossup for the War Eagles.

East Forsyth is a heavy run team, about 80 percent of its offense, which makes it much different than most of the teams in the CPC.

That could be good news for a Davie team that allowed 472 passing yards  in the loss to Glenn.

Offensively, Davie has been nothing short of incredible.

Alex Summers has thrown for 1,140 yards and has 11 TDs and three interceptions.

Receiver Jack Reynolds might set records in a season of normal length. He has 35 catches for 608 yards and seven TDs.

Davie finishes the regular season against West Forsyth next week.