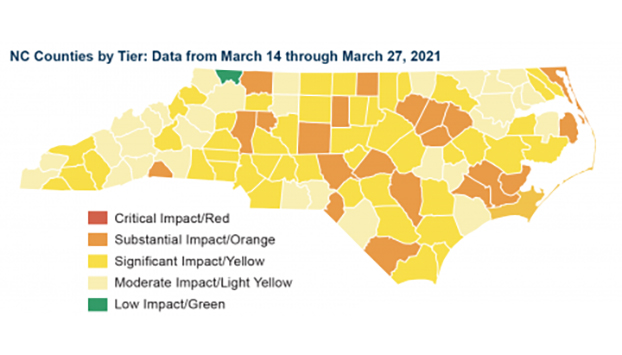 Above is the state's newest map for COVID-19 community spread.

SALISBURY — Rowan County finds itself somewhere in the middle of the state for community spread of COVID-19, according to an updated county alert system from the N.C. Department of Health and Human Services.

The update, released late Thursday, includes five total tiers for how counties are being affected by COVID-19. From most severe to least, they are critical, substantial, significant, moderate and low. Rowan County is in the significant tier, which was previously the least severe. The newer tiers come as COVID-19 virus spread has dropped significantly from a spike at the beginning of the year and remained relatively flat since then.

Counties are grouped into tiers by positive cases per capita in the previous two weeks, tests coming back positive and the impact on hospitals.

Data for Rowan County is 245.6 positive cases per 100,000 residents in the previous two weeks, 5.8% of cases returning positive and a minimal impact on local hospitals. To move to a lower tier, rowan County could reduce its percent of tests coming back positive or see a lower impact on hospitals.

Rowan County is joined by 46 others in the significant category.

There are 21 counties in the substantial tier, 31 in the moderate tier and one in the low tier. For the first time since the start of the alert system, there are no counties in the critical tier.

Two of the five neighboring counties — Iredell and Davie — find themselves one tier lower than Rowan. Others are in the same tier.

The county doing best in controlling community spread is Allegheny, which covers a rural area at the North Carolina-Virginia border, according to the alert system. There, the state reports just 62.9 positives per 100,000 residents in the previous two weeks, a 1.4% positive test rate and baseline impact on hospitals.

Data about new positives was not available Friday because of the Easter holiday.