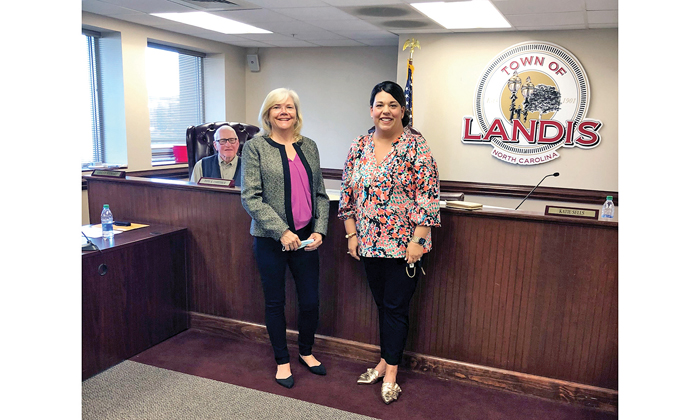 Courtesy Photo — Landis Finance Officer Diane Seaford (left) was hired on Tuesday, March 30, 2021, to serve as the new town manager with an annual salary of $95,000. Seaford was hired as finance officer in September 2019 and has worked under the guidance of Interim Town Manager Leonard Barefoot since January 2020. Mayor Meredith Smith, right, and Alderman Tony Corriher, seated.

LANDIS — After months of vetting a dozen candidates, the town of Landis unanimously voted Tuesday to hire Finance Officer Diane Seaford as the new town manager.

Seaford was hired as finance officer for the town in September 2019. She has also served as assistant town manager for the town under interim manager Leonard Barefoot, a China Grove local who was hired in January 2020 to help stabilize the town and assist in a proper vetting process in hiring a permanent manager. The end of Barefoot’s term was slated for July, but the search for a new town manager was delayed because of pandemic.

Barefoot retired in 2007 as the manager of Sanford after 14 years and has since served as an interim town manager for multiple municipalities.

Seaford was selected from a pool of 12 candidates. She agreed to an annual salary of $95,000, with her official duties beginning this week. Her employment agreement states her annual salary will be adjusted for cost of living increases in the same manner made as all other town employees, with a 3% increase to her base salary following a satisfactory formal performance review.

Former town manager Roger Hosey, who was fired five months after being appointed to the town manager position in 2020, had a starting, yearly salary of $87,000.

Seaford previously worked as a budget officer for Cabarrus County, holds a degree in business from Meredith College in Raleigh as well as a master’s of business administration from Pfeiffer University in Misenheimer.

“Credit for so much of what we have accomplished during this difficult past year goes to Diane,” Barefoot said. “She has an incredible work ethic. I am confident citizens will continue to see progress under her leadership.”

The decision came after a slew of closed sessions held since early March when the town narrowed its search to five candidates. On Feb. 9, the board met to assess 12 applications, and five candidates were interviewed March 1 from 1:30 p.m. to 7 p.m. Additionally, the board met in a closed session on March 15 and on Tuesday to continue the selection process and consult with an attorney regarding the employment agreement for the new manager.

“We interviewed five really good applicants for the position,” Mayor Meredith Smith said. “However, Diane’s body of work here during the past year proved to be a deciding factor.”

The town’s employment agreement with Seaford states she will be tasked with “the proper administration of all affairs of the town of Landis,” which includes appointing, suspending and removing any employee of the town, preparing and administering the annual budget, directing and supervising the administration of all departments in the town, keeping aldermen advised of the town’s financial condition and future needs, supervising the town’s purchase of all materials and recommending the adoption of a pay and compensation policy for town staff.

Seaford and her husband, Todd, live in Concord. They have two daughters and two grandchildren.

“I am extremely honored to have been selected to serve as the next town manager of Landis,” Seaford said. “I owe a debt of gratitude to Mr. Barefoot for the experience he has shared with me over this past year. We have an amazing staff in place and are well positioned to move Landis forward in a positive manner.”