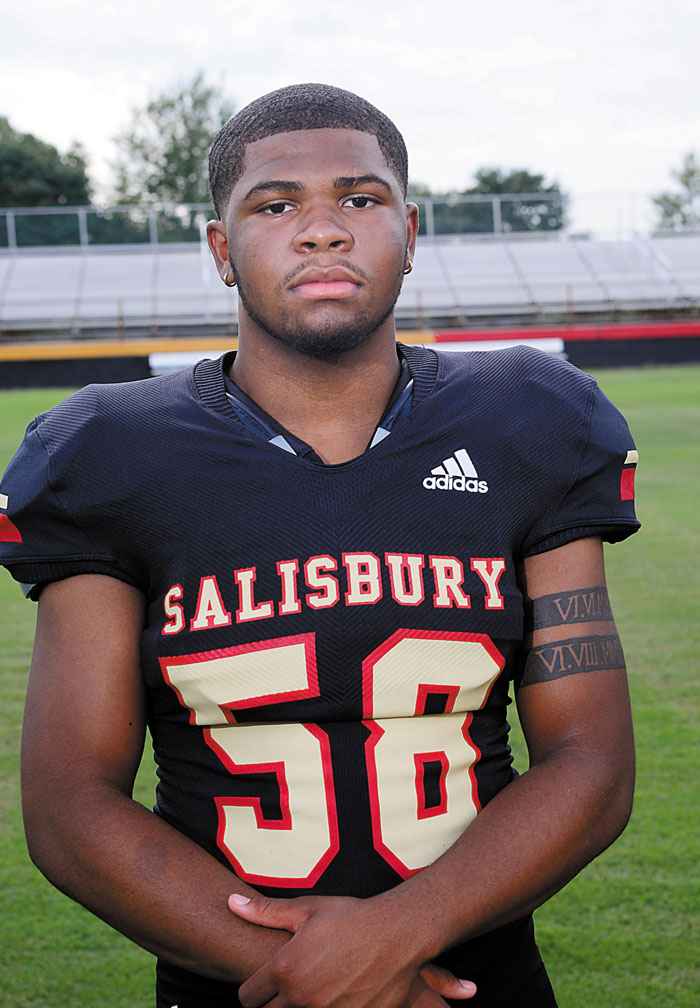 Tkaii Gaither of Salisbury. Photo by Wayne Hinshaw, for the Salisbury Post

SALISBURY — Tkaii Gaither isn’t convinced there’s anything strange about a 200-pound right tackle blocking for a 225-pound running back.

Sophomore JyMikaah Wells, a Beast with a capital B, is getting lots of yards and touchdowns for the Hornets.

Gaither is one of those guys who won’t get another PA shoutout after the lineups are introduced. He may never get a photo or quote in the paper, but he’s out there diligently opening the holes for Wells and protecting quarterback Vance Honeycutt.

Gaither said his mother was seeking a first name that was simple, but unique, and she found one. There are about 2,000 Takias in the U.S. and 700 or so Takeos, but only a few Tkaiis. It’s pronounced Tuh-kye.

While he’s an important part of Salisbury football, Gaither is at least as proficient in wrestling. He doesn’t have to drop much weight to grapple. He was a regional runner-up and 2A state qualifier at 195 pounds last winter.

“Being  a wrestler has been a really big help to me in football,” Gaither said.

Leverage, flexibility, quickness, power, balance. All those attributes that make a winner on the mat translate very well to the football field.

“Wrestling is a one-on-one battle,” Hinson said. “I think that experience helps Tkaii win a lot of those battles on the line against bigger people.”

Gaither was one of the Rowan wrestlers who traveled with the Darkhorse Wrestling Club of Charlotte and competed in the National High School Coaches Association Fall Duals in Maryland. He should be one of the best in the state in his weight class this year when the wrestling season finally arrives. Matches are scheduled to start later this month.

The other less than obvious thing that helps Gaither perform as well as he does is Salisbury’s defensive line.

“When you practice against guys like Zae Clay and Kevin Hayes every day, you have to get better,” Gaither said. “They’ll work you hard.”

Salisbury has made progress with the synchronicity of its offensive line in recent weeks. That’s always a key team within the team. It takes time for the big fellows to mesh, but the Hornets’ o-line is starting to look more like it did during the exciting playoff run of 2019.

Wells is pounding away. He’s topped 100 rushing yards five straight weeks, but the gains are coming in bigger chunks now.

Wells wears people down. In a physical 28-6 win against Central Davidson last Friday, Wells averaged 11 yards per carry in the second half.

“JyMikaah is big, but he also runs like a 4.5,” said Gaither, shaking his head in admiration.

Gaither also has some wheels.

“There was this time Vance Honeycutt started running around back there and then took off and made a big play out of it,” Hinson said. “We look up and we’ve got a lineman sprinting 40 yards down the field to block people. That’s Tkaii. That’s the kind of effort he plays with.”

Ledford comes to Ludwig Stadium for a huge Central Carolina Conference game on Thursday at 6:30 p.m.