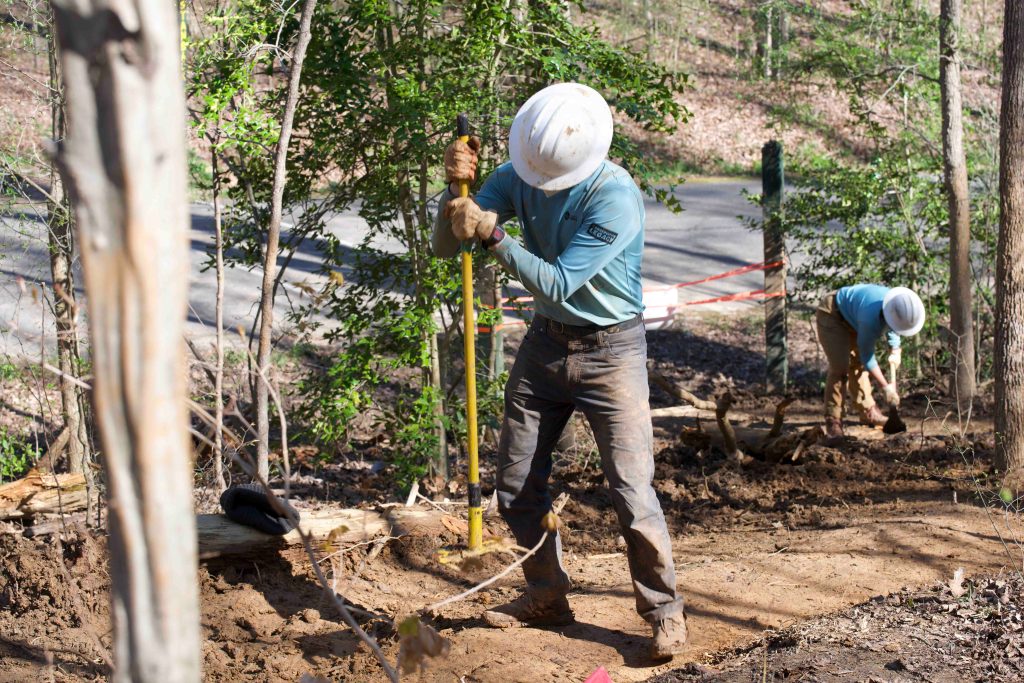 Carl Blankenship/Salisbury Post - Drew Gotwals tamping a new trail off of Rowan Avenue. The crew replaced the existing trail that lead straight up the hill with a more sustainable switchback.

SPENCER — New and improved trails are being built at Fred and Alice Stanback Educational Forest.

Conservation Corps North Carolina, which dispatches teams to improve parks across the state, sent six people to the forest this week to improve the trails. They’ll be back in Spencer next week, too, to keep working. The goal, assistant crew leader Lillian Cahill said, is to make hiking trails more sustainable so maintenance isn’t as necessary in the future.

The workers in Spencer have been building trails by hand, including new switchbacks at the trail off Rowan Avenue to replace the entrance that went straight back into the forest.

Cahill said problems with trail construction are common and can lead to erosion issues. In the case of the trail on Rowan Avenue, the fact that it led straight into the woods can cause a stream of water to pour down the trail when it rains and wear it away. Adding switchbacks, or curves, in the trails stops that from happening.

Another issue is people wanting to cut across trails, which also leads to erosion. The group is building rock retaining walls to deter people from doing that as well. The workers are also building a 2,000-foot loop.

Some of the people working on the trail had never performed trail maintenance before. Russell Smith lost his job when the COVID-19 pandemic struck, has experience in the back country, a degree in tourism and friends who said good things about working with the Conservation Corps.

“After going through some not so wholesome or fulfilling jobs, I decided this was the path that I wanted to take and I wanted to be a part of something that was a little bit bigger than me, something that really gave back and contributed,” Smith said.

Smith said the work is hard and dirty, but it is helping him build his own character.

“It has been nothing but a learning experience and I’ve felt nothing but physical, emotional and mental growth,” he said.

AmeriCorps members working for the Conservation Corps are given a weekly stipend and an educational award when their service is finished.

The Stanbacks are major contributors to conservation efforts and they are the project partner for this trail build. The park is also named for them.

“We want this spring’s trail work to honor Mr. and Mrs. Stanback’s gift to conservation, and all they have done to make it possible for more people in North Carolina to enjoy the state’s treasured landscapes,” said Conservation Legacy Development Director Jan Pender in a statement. “The trail improvements will hopefully add to their own enjoyment of nature and the Fred and Alice Stanback Educational Forest and Nature Preserve.”

In November, Three Rivers Land Trust announced the acquisition of 50 acres to add to the park, which will more than double its size.