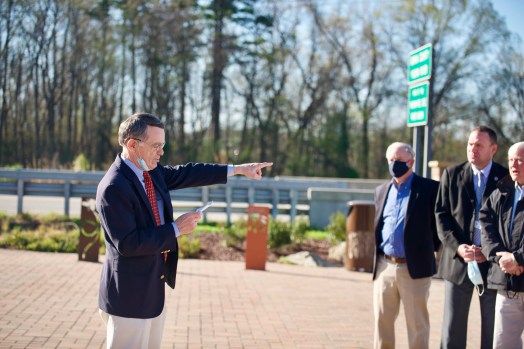 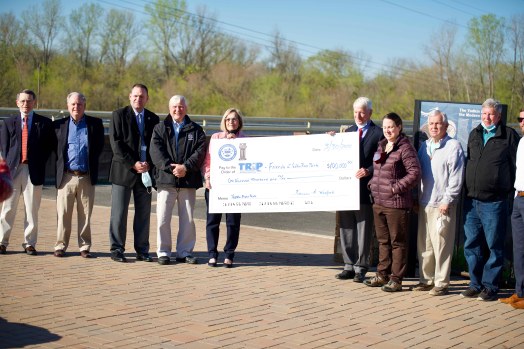 Salisbury resident Ronnie Smith announced the grant to the group during the check presentation at the park on Tuesday morning. Smith said the additional gift was in honor of former and current Yadkin River Park Committee chairs Max Walser and Paul Mitchell.

Davidson County Commissioners Chair Karen Watford said the park will probably need a couple million dollars in funding to build and develop all of its planned amenities.

The funding presented Tuesday will help build a dog park as well as install sidewalks and a parking lot. In the long run, the hope is to build larger parking areas, restrooms, a visitor’s center and playground. A museum is a possibility as well.

The park is the site of Fort York, the location of one of the final battles of the Civil War.

Jason Walser, a park advisory committee member, said he was a supporter of the bridge being preserved from back when he was executive director at Three Rivers Land Trust in Salisbury.

“I believe that this is under-appreciated in Rowan County, but I think over time it’s going to end up being a destination point that’s going to serve Spencer and Rowan County very well,” Walser said.

The Davidson County park is only one part of the equation at the bridge. Spencer is immediately on the other side of the river and has plans to enhance its side as well. The town is planning to build a trail, parking area and benches.

A year ago, Waterford Funding purchased the former N.C. Finishing Company property, which sits nearby, for $3.5 million with initial plans for environmental cleanup on the site.

Interim Spencer Town Planner Joe Morris said the immediate work is to finish Davidson County’s repair to the Wil-Cox Bridge in May.

After the check presentation, Morris met with an N.C. Parks Service official to discuss grant possibilities for the Spencer side. Morris said the town has been interested in a Parks and Recreation Trust Fund grant, but is looking into applying for different opportunities, too.

NCDOT is turning over surplus right-of-way on the Spencer side of the bridge to the town for development purposes. On Tuesday, Morris said documents for the donation are being prepared.

The park, just past the Rowan County line into Davidson County, is an ongoing project that first opened to the public in 2019. It is now drawing about 600 visitors per day.