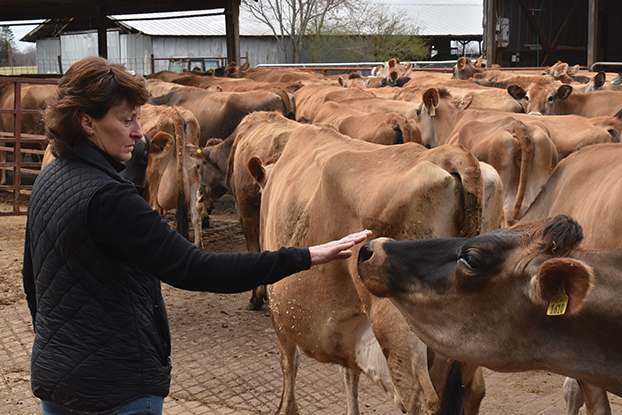 Leigh Anne Wetmore pats a cow's head as the herd is directed into the milking parlor. Ben Stansell/Salisbury Post

MOUNT ULLA — Tears welled in Leigh Anne Wetmore’s eyes as she watched thousands of gallons of milk from her dairy go down the drain.

There was nothing wrong with the milk itself, which was from a herd of about 150 Jersey cows at Lutheridge Farm in western Rowan County. It wasn’t spoiled, rotten or comprised. It had even been pasteurized on site, rendering it devoid of harmful bacteria. With grocery stores depleted of necessities due to the pandemic, it likely would’ve sold quickly had it been sitting on a shelf in the dairy aisle at Food Lion or Harris Teeter.

The problem was that Lutheridge Farm didn’t have the equipment to mechanically fill, bottle and cap its pasteurized milk in a container to sell it, which is what North Carolina dairy laws require. With the farm’s two main clients needing less milk to make their products, Lutheridge Farm had nowhere to sell it.

Like many dairy farmers across the country last spring, the Rowan County farm was forced to dump its product and take a loss.

“It was heartbreaking,” said Leigh Anne, who co-owns and helps manage the family farm.

Dealing with supply chain issues brought on by a pandemic is one of the many challenges facing small, family owned dairies like Lutheridge Farm. Along with difficulties finding a steady market and issues getting an adequate return on investment, dairy farming requires hard work, and lots of it.

Despite those obstacles, the roughly 300-acre farm is forging ahead behind a dedicated team of family members willing to sacrifice, critical partnerships with nearby cheesemakers and a herd of Jersey cows that produces highly sought-after, buttery fat milk.

If not for Leigh Anne and her brother, Richard Luther, their father’s farm might not still exist today, almost six decades after it was started.

Lutheridge Farm was founded in 1965, when Ted Luther bought his first Jersey cow and started a dairy with his brother, Ben. Two years earlier, Ted moved to Rowan County from Asheville to work as a dairy research supervisor at the Piedmont Research Station.

From just one cow, the Luther brothers expanded their dairy to a herd of about 150. Along the way, Ted became an expert on the Jersey breed and served in leadership positions with the National All-Jersey Board of Directors. In the 2000s, he was recognized by the American Jersey Cattle Association for his work. 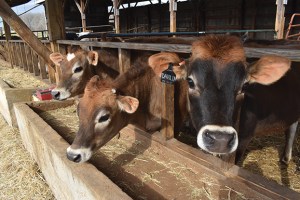 Citing fatigue, the Luther brothers eventually gave up the milking business in 1997 and transitioned to producing replacement heifers they sold to dairy across the country and even internationally. After Ted passed away in 2013, the farm’s stock of cows dwindled to a small herd.

“A year or two after daddy died, Richard and I were standing out in the hay barn one day and were talking and we said ‘What are we going to do?’” Leigh Anne said.

Hoping to restore the dairy to its former glory, Leigh Anne and her husband, Mark, as well as Richard and his wife, Robin, purchased Ben’s half of the farm in 2016.

Knowing the farm needed at least one full-time employee, Leigh Anne called her son, Steven, in the winter of 2016. Steven was in Ohio at the time, working on a soybean and corn farm owned by his wife’s father near Toledo. Dairy farming had always been the “only thing he wanted to do.”

The family is very partial to the Jersey breed, which typically comes in varying shades of brown. 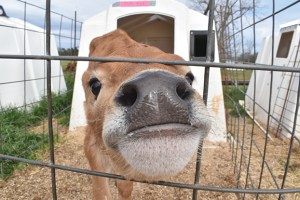 A curious calf at Lutheridge Farm pokes its nose through a fence. Ben Stansell/Salisbury Post

The family has entered their best and most beautiful Jersey cows into state and national competitions. More than often, they do pretty well. A cow named Princess was a Grand Champion at the N.C. State Fair several years, and a cow named Luna won her class at a national show in Louisville.

“We don’t lose,” said Jonathan Luther, Steven’s cousin, who grew up raising show cows and helps out on the farm today.

Steven, Jonathan and Lauren Luther, Jonathan’s sister, spent their childhood summers on the dairy farm, taking care of their cows.

“As a mom, I was very grateful because in the summertime, our kids didn’t sleep in,” said Robin Luther, Jonathan and Lauren’s mother. “They were up at 7 o’clock and they were up here mucking stalls, walking their calves and feeding and watering with grandaddy. Then they were back up here in the afternoon doing the same thing.”

While all three of them were and still are interested in dairy cows, it’s always been an obsession for Steven.

When he was at N.C. State, one of Steven’s college friends joked that if he spent as much time studying for class as he did learning about cow breeding, his grades would’ve been a lot higher.

“He was probably right,” Steven said.

That’s why when his mom called and asked him if he’d like to head the family’s renewed dairy operation, he didn’t think twice.

Steven and his wife, Kira, moved back to Rowan County in the spring of 2017. Kira now works at the Piedmont Research Station, like Steven’s grandfather once did, and is another critical part of Lutheridge’s success. 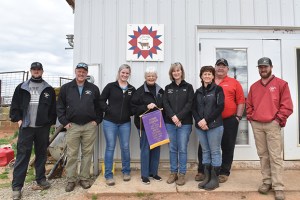 Reviving the dairy farm wasn’t a quick or easy process. When Ted and Ben sold many of their dairy cows, they also sold off much of the equipment needed to milk them. Even if Lutheridge was able to grow its herd and buy the equipment to milk them, they’d need a place to sell the milk. Turned down by several dairy co-ops because they were “small and wanted to stay small,” Lutheridge was in desperate need of a buyer. At the same time, Alfanso Siano, the owner of the family-run and Charlotte-based cheese company, was searching for the right milk supplier to make his fresh mozzarella. Siano heard about Lutheridge and started experimenting with their milk.

“He would take samples and we would go get gallon jugs and just take them to him and he would make samples of it that he would try,” Leigh Anne said. “After a while, he finally figured out that our milk, rich in protein and butter fat, was the kind of milk he wanted.”

The two struck a partnership that allowed Lutheridge to expand its operations by purchasing much-needed equipment, including a milk pasteurizer. The family now milks about 70 cows twice a day to keep up with demand.

Not long after the Siano partnership materialized, Lutheridge found another buyer in Boxcarr Handmade Cheese near Raleigh. The artisanal cheese company uses the farm’s milk to make a number of its award-winning cheeses. 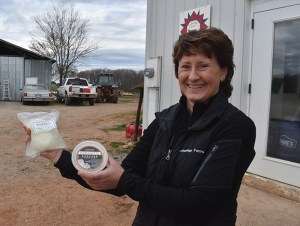 Leigh Anne Wetmore holds the two brands of cheese that are made from the milk produced at Lutheridge Farm. Ben Stansell/Salisbury Post

Having those business partners helped Lutheridge survive the worst of the pandemic. After an initial dip in production, which led to the dairy having to dump about 6,000 gallons of milk, Siano and Boxcarr have started regaining their footing.

“From the first of May to mid-May, we were dumping some portion down the drain every week, progressively less and less,” Steven said. “From May until now, we haven’t dumped a bit of milk.”

But even business close to normal isn’t easy for a small dairy farm.

Medium and small dairies have been disappearing for decades, forced out of business by bigger conglomerations, high prices, low return on investment and an aging farming population. 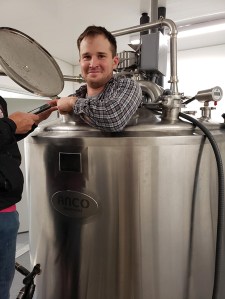 Steven Wetmore stands in the farm’s pastuerizer after performing some maintenance on the machine. Photo submitted.

Unable to pay anyone else, Steven is still Lutheridge’s only official full-time employee. Even though they might not get a salary, most of the family pitches in on the farm when they can. There are even some non-family members who lend their time to help on the farm.

“We’re blessed with volunteers that want to help us and see us succeed,” Leigh Anne said.

Leigh Anne, who is retired after teaching special education at West Rowan, spends much of her free time on the farm.

Despite losing most of its dairies over the previous few decades, Rowan County is still the third-biggest dairy county in the state, with eight Grade A dairy farms, according to Rowan County Extension Agent Morgan Watts. That’s still a steep drop off from the 65 dairies that operated in the county in 1987.

Richard said he hopes the family can keep Lutheridge Farm going for as long as they can.

“We’d like for all the kids, if they want to work here, for this to be there for them one day,” Richard said.

The family hopes to soon have bottling machinery installed. Then, they’ll be ready the next time a pandemic comes around.