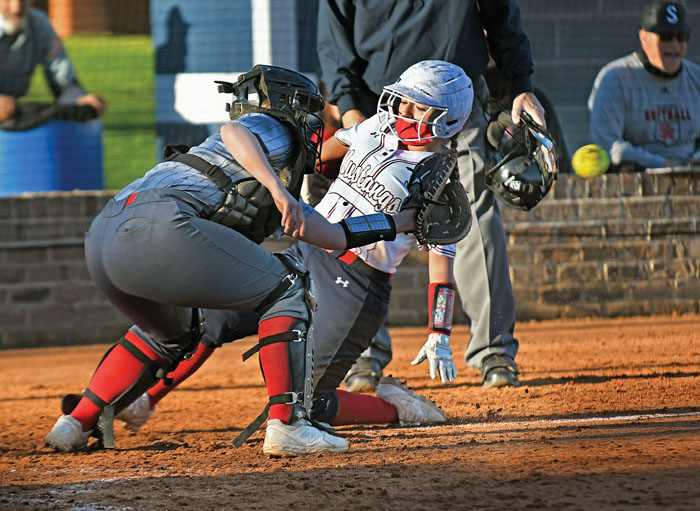 With one out in the bottom of the second, the Mustangs (2-0) got consecutive hits from Maddie Schroeder, Myah Sifford and Jaeley Legg to get the big inning started.

Three errors and two walks followed and made it 5-0. Things snowballed from there. East sent 16 batters to the plate in the inning.

Mac Misenheimer started the bottom of the third with a double and eventually stole home to make it 11-0.

East tacked on its final two runs in the fourth.

Haley Strange pitched a one-hitter for the Mustangs, striking out nine and walking four in the five-inning game.

Sifford went 3-for-3 and scored twice.

Avery Crowell, who pitched the first two innings, had a double leading off the fourth for the Raiders (1-3).

South had a walk and a hit batsman to load the bases, but Strange got a strikeout and a groundout to end the threat.

To view and purchase photos from Monday’s game, click here.

Emma Clarke and Taylor Walton had three hits each, while KK Dowling and Allison Ennis had two apiece.

Kenadi Sproul had three walks and a hit and scored two runs.

It was 3-1 after five, but the Falcons broke it open in the late innings.

Clarke hit  a two-run homer in the sixth. Ennis had a two-run double in the seventh.

SALISBURY — Salisbury scored seven runs in the second inning and won 10-0 against North Rowan in a non-conference game on Monday.

Katie Peeler pitched a no-hitter in the five-inning game with 11 strikeouts and three walks.

Ellen Yang had a triple and two RBIs. Peeler had two RBIs. Rachel McCullough had a double.