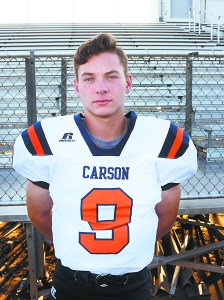 The game was played at South Iredell after postponements on Friday and Saturday.

Statesville moved into a tie for first place with West Rowan. Carson plays at West Rowan on Friday.

Monday’s first half was actually a defensive struggle. It was 3-0 for a long time. Carson got a TD pass from Alex London to Jake Harris  with 17 seconds left in the half to trail 10-7 at the break.

“Our defense played their butts off in the first half,” Carson head coach Daniel Crosby said. “Statesville is arguably the best team in our league and we were getting stops.”

Carson stayed in it with big plays — a long TD run by CP Pyle and a long TD pass from London to Emory Taylor. Pyle also had a short scoring run.

Carson got within 36-31 with a TD with 2:40 left and came very close to recovering the onside kick that followed. The Greyhounds dodged that potential problem and tacked on the clinching score.

“We’ve got as much toughness and heart as any team I’ve ever been around,” Crosby said. “But turnovers are killing us.”

Carson lost the turnover battle 6-1 to the Greyhounds.

“I don’t care who you’re playing — it’s just about impossible to overcome that,” Crosby said.

Carson (2-3, 1-2) was minus-3 in the turnover fight in the wild loss to East Rowan and minus-2 in the loss to Mount Pleasant.

That’s minus-10 on turnovers in the three losses.

“It’s not any one thing,” Crosby said. “We’ll keep fighting and we’ll fix it.”

The big Ledford at Salisbury Central Carolina Conference game this week will be played on Thursday.

KERNERSVILLE — Davie County’s football team lost 53-46 in a Central Piedmont Conference game that was completed on Monday after being suspended early in the fourth quarter on Saturday.

Glenn had 225 rushing yards and an astounding 451 passing yards.

Catawba (0-2) plays its second (and last) home game of the spring season on Saturday when it hosts Barton at 1 p.m.

Larry Petrea had a hole-in-one at The Revival Golf Course at the Crescent on Thursday.

The shot was witnessed by Mark Matney, Nick Mueller and JR Sexton.

Clement had longest putt. Azalee  Huneycutt was closest to the pin.

Dates are set for the Rowan County tournaments.

South Rowan senior Anna Rymer, CCC Player of the Year and  co-player of the year for Rowan County is headed to Ferrum.

She received a full-ride academic scholarship to the Virginia school.

Weddington topped New Hanover 2-1 in overtime to win the 3A boys soccer championship.

Cardinal Gibbons beat Myers Park 3-0 for the 4A championship.

Croatan scored three overtime goals to top Hibriten 4-1 for the 2A championship.

Pine Lake Prep topped Franklin Academy 3-1 in overtime for the 1A title.

Rymer had a top-five hitting percentage in the conference at 0.295.

Rymer was second on the team in kills per set at 2.69 and was third on the squad in total kills with 183.

She had a career-high in kills with 17 against Dallas Baptist University at the NCCAA National Championships.

Pfeiffer’s Jonathan Brindle (East Rowan) threw a season-best 149-8 in the javelin and placed sixth in the Montreat Invitational in Black Mountain.

Catawba’s Adrian Rudisell (North Rowan) had a personal best of 119-11 in the discus in the Montreat Invitational.

Catawba’s Christina D’Amelio (A.L. Brown) was fifth in the 10,000 meters in the Montreat Invitational.

Moises Gomez hit a three-run homer — his third of the spring — to cap a 12-run eighth inning for Tampa Bay. MLB’s top prospect Wander Franco had an RBI single in the rally that saw the Rays score 12 times before the second out was recorded.

Twelve of the first 13 batters in the inning reached base. Kevin Kiermaier had a double and his first homer, a two-run shot.

Freddie Freeman had a double and his first homer — a two-run shot in the sixth. Alex Jackson homered in the seventh  for his second of the spring. Charlie Morton made his third start, allowing two hits  in three scoreless innings.

Salisbury native Michael Childress shot 77-77 for Richmond and tied for 51st in the Golden Horseshoe Intercollegiate held in Williamsburg, Va.