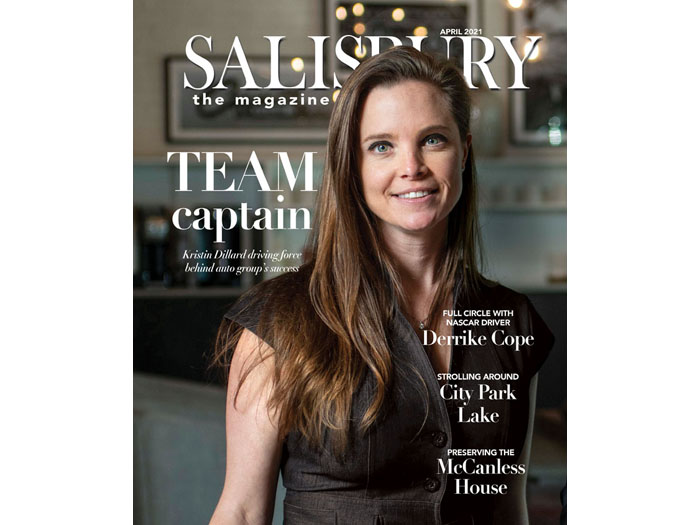 SALISBURY — The April issue of Salisbury the Magazine, a publication of the Salisbury Post, has reached subscribers and is now available at its normal distribution spots elsewhere in Rowan County.

The April edition features Kristin Dillard, president of Team Automotive Group, on the cover. Contributing writer Susan Shinn Turner and photographer Jon Lakey combine on the story about Dillard and her rise through the company, which includes a headquarters in downtown Salisbury and car dealerships here and in Boone, Creedmoor, Swansboro and Goldsboro.

City Lake has undergone extensive improvements in the past year, and contributing writer Kris Mueller documents some of the changes made possible by the work of grounds maintenance, facilities and street department crews of the city of Salisbury.

The lake, which dates back to the 1930s, has a new 96-foot-long pier into the middle and walking paths around the entire 3-acre body of water.

Elsewhere in the April issue is a piece on photographer Duane DuVall, who often trains his camera on street scenes from Salisbury and Kannapolis. Staff writer Ben Stansell and photographer Sean Meyers tell the story behind The Gateway building and how it has lived up to its promise as an important welcome mat for the community.

Contributing writer Ben White and photographer Wayne Hinshaw meet up with NASCAR’s Derrike Cope, a Salisbury resident, as he raced in his last Daytona 500 and continues on with a new chapter in his career.

The April issue debuts a new department in the magazine — “When History Speaks” — which will be a regular contribution from Historic Salisbury Foundation. In the first installment, Karen C. Lilly-Bowyer writes about the enterprising Napoleon Bonaparte McCanless and the history behind the circa 1897 house he built on South Main Street — a Second Empire-styled structure the foundation has made part of its Revolving Fund.

On the Bookish page, Alissa Redmond provides three recommendations on children’s books. Tim Truemper of Salisbury submitted the photo for Through the Lens, and Celia Jarrett shared her painting of St. Luke’s Episcopal Church as the artwork for Salisbury’s the Place.

Salisbury the Magazine publishes nine times a year. The May issue, now in the finishing stages, is expected to reach subscribers sometime in mid-April and be distributed elsewhere in Rowan County later in the month.