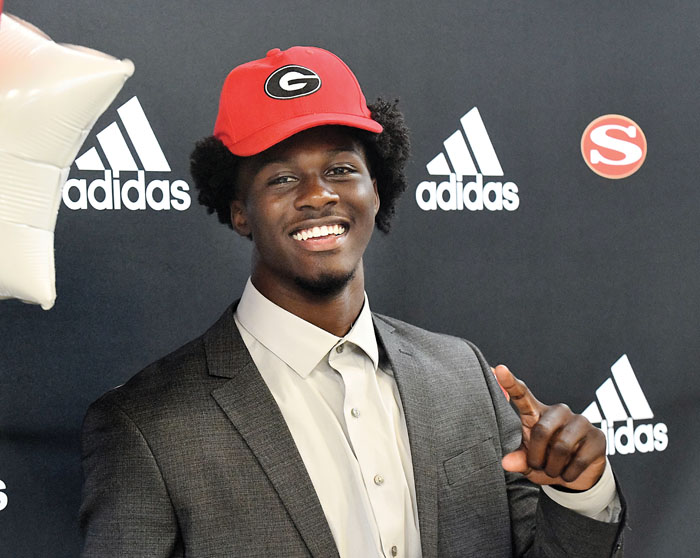 Jalen Walker wearing the Univerity of Georgia cap is all smiles. photo by Wayne Hinsnaw, for the Salisbury Post

Georgia was Walker’s choice to the surprise of many. Among other reasons, Georgia is building an unbelievable, defense-oriented recruiting class that rivals Ohio State’s as the nation’s best.

Walker said he enjoyed the entire process, and he had the maturity to handle it gracefully. It was a recruiting struggle the likes of which Rowan had never seen, not for national record-setting running back K.P. Parks. Not even for McDonald’s All-America basketball player Scooter Sherrill.

The only recruiting battle that resembled Walker’s in recent decades was the frenzied pursuit of A.L. Brown running back Nick Maddox, a two-time state player of the year and a first team USA Today and Parade All-America in 1998.

Maddox, who handled his recruitment from the phone in the family kitchen, eventually picked the Florida State Seminoles over Georgia, Florida, North Carolina, Tennessee and Notre Dame.

With the rise of social media, thousands followed Walker’s recruiting and hung on his every tweet.

Why all the fuss?

He’s rated as the second-best prospect in North Carolina in the Class of 2022 and as the No. 4 outside linebacker in the country. With all positions considered, he’s rated as a top 40 player nationally in his class.

He’s basically an outside linebacker, and that’s what he’ll be in college, but the Hornets have used him as a defensive end quite a bit. They even put him at free safety recently to shut down North Davidson’s passing game in the second half. His biggest asset is speed. Teams obviously run wherever he’s not, but he can still chase plays down from behind.

In the North Davidson game, playing one-handed due to a heavy wrap to protect an injured finger, Walker had an 80-yard fumble return and a 13-yard run for a first down on a faked punt.

It’s not an exaggeration to say Walker could play anywhere on defense — or offense. He proved last season that when he has two healthy hands he can catch touchdown passes.

Beyond the physical stuff, Walker brings all the intangibles to the field and to the locker room. The son of Catawba head football coach Curtis Walker, he’s been looked to as a leader since his first day on campus at Salisbury. 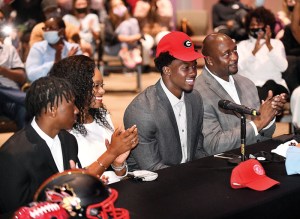 Jalen Walker selected the University of Georgia and put on the Georgia cap as his brother, Deuce, mother, LaSheka, and father, Curtis smiled and applauded with approval. photo by Wayne Hinsnaw, for the Salisbury Post

He was an all-conference and all-county basketball player this year despite being a non-shooter.

His rebounding and shot-blocking defied belief, at times. His rejection of a rim assault by North Davidson’s All-State player Jamarien Dalton — Walker was so high off the floor his hand was in the square — has become legendary. In track and field, he would have been a force sprinting and jumping last spring, but the Hornets only had one meet before COVID shut down the season.

Walker trimmed a long list of schools, including nine SEC schools, down to 10 finalists in August. He narrowed his choices to six in November — Alabama, Auburn, Clemson, Georgia, North Carolina and Ohio State.

It came down to Georgia, Clemson and UNC.